A prominent Semai woman was honored last week in Kuala Lumpur with an award that recognizes her outstanding service to unite and empower the Orang Asli indigenous people. The Fraser and Neave Out-Do Yourself Awards were given to six Malaysians, or groups, that had displayed heroism or other acts of selfless service to the nation—actions which otherwise might not have been recognized. 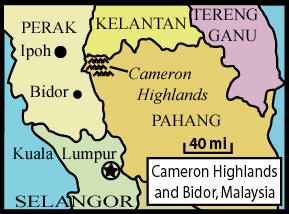 Tijah Yok Chopil, the Semai woman, has become a leading advocate of Orang Asli rights, especially in Bidor, Perak state. She was quoted in several news stories in March 2007 when she protested the destruction of a traditional Semai forest under the government’s pretext of building a botanical garden. She was quoted again the following month in news accounts that provided more details about the project—and its opponents.

Later that year, Tijah Yok Chopil spoke at a national law conference in Kuala Lumpur, where she entertained the legal authorities with a lively, effective speech about living conditions in Semai villages. She emphasized that, while poor, the Semai at least have roofs over their heads. And they never have to contend with the rapes and thefts that sully life in the Malaysian cities. “We never have to resort to crimes like those who live in the city,” she told the conference delegates in 2007.

In March 2009, she was a leader in advocating indigenous rights at a time when the Perak state government was in flux. She spoke to the press two years ago in her role as Secretary of the group Jaringan Kampung Orang Asli Perak (JKOAP).

The judges presented her the award last week for establishing still another organization, Sinui Nanuk Sngik or SPNS, a group which holds classes for adults on many topics, such as paralegal training about land rights and basket weaving. SPNS evolved into the Orang Asli Village Network of Peninsular Malaysia, which champions indigenous rights. In accepting the award, she urged that the Orang Asli (original people) should not be marginalized from mainstream developments.

The awardees were each given a plaque, a certificate, some Fraser and Neave products, and RM5,000 (US$1,637.00). Fraser and Neave is a consumer products conglomerate in Asia, which had its beginnings as a beverage company in Southeast Asia. F&N started making the awards in 2008 in celebration of its 125th anniversary.