The Museum of the American Indian in Washington will host the first U.S. showing this weekend of the new documentary film “Inuit Knowledge and Climate Change.” The Inuktitut language production, with English subtitles, was developed by Zacharias Kunuk, the well-known director of the prize-winning film “Atanarjuat: The Fast Runner,” along with Ian Mauro, a scholar from the University of Victoria.

The film is already available on its website, so anyone can watch it over the Internet. The documentary, filmed in a similar, evocative style as Atanarjuat, features the voices of the indigenous people—hunters, elders, local people—talking about their lives and the changes they are experiencing due to climate changes.

It opens with people telling viewers how conditions used to be, when they were young and they were being raised out on the land. Their stories are backed up by great footage of wizened elders, charming children, and lovely people enjoying themselves outdoors, though dressed in very contemporary, modern garb.

“Our parents and grandparents taught us how to live, survive on the land, and be a good person,” Dora Pudluk from Resolute Bay explains while the camera shows a man carrying a fish on a line, and then putting it in a pot to cook. Elijah Nowdlak, from Pangnirtung, says, “We were taught to take care of wildlife and harvest only what we required.” A group of people are seen squatting around a large tray of food, from which they are eating and sharing.

The focus shifts when Rita Nashook of Iqaluit says that southern people do not want to understand the Inuit. Her comment becomes the theme for much of the film. “They’re ignorant about our culture, don’t consider our opinions.” The video includes people, animals, and birds doing things out on the land, while various types of music or natural sounds provide additional background. There is no omniscient narrator.

The story gradually focuses on climate issues. People describe the effects of a warmer earth in their region. Sheila Watt-Cloutier, a prominent Inuit leader, gives erudite explanations of the conditions that are causing climate change. Another leader, Mary Simon, explains that they are a hunting culture, and climate change is affecting the animals they rely on for their food. She discusses the differing perceptions of global warming between themselves and outside scholars. “Scientists,” Simon says, “talk about climate change with studies on pollution and toxins, whereas Inuit discuss the effects as they occur within our lives.”

The people describe how the temperatures warmed dramatically ten years ago. It has remained very warm ever since. The glaciers that used to cover the land are now gone, they say, the ice is thinning, the edge of the sea ice is changing, and there are fewer icebergs. The Arctic is still cold, but not as cold as it was in earlier decades.

The land is also changing due to climate conditions, not just the water and ice. The permafrost is degrading. It may look like land, but as it melts, the land will become mud with gravel on top. Inuit communities will be in danger. 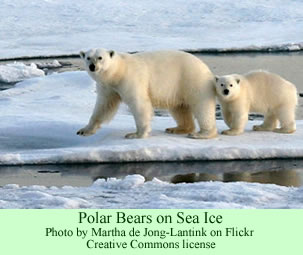 Antagonism toward southerners, particularly biologists, comes out most strongly in a segment on polar bears. The Inuit maintain that the polar bear population has increased greatly over the past 30 years. It used to be rare to see one, but now they are common everywhere. With ample footage of big white bears in the background, people describe how everyone is now concerned about the frequent dangers they pose, a change from the past. Many Inuit blame the biologists for their bear problems. The animals are no longer afraid of humans, a situation caused, people feel, by the wildlife biologists themselves with their constant tagging, collaring, and monitoring.

As if to punctuate the anti-scientist attitudes, however, the next segment concentrates on the opinions, expressed by four different people, that climate change is caused by a recent tilting of the earth’s axis. Perhaps the filmmaker purposely wanted to cast doubt on the accuracy of the earlier statements about polar bears, though that is not clear. The speakers explain how the recent tilting of the earth’s axis has changed the angle of the sun’s rays, which is causing conditions to get warmer.

Because of toxins carried in by the winds, the Inuit have been advised that they should ease off on eating their traditional foods, which are now contaminated. But that is difficult for them. “If the human race is going to die off, Inuit may be the first,” one man says, as a woman holds a large fish on a rock and cleans it. Another woman picks up the same theme. “We cannot exist purely by making money. If we do not have our environment, we cannot survive, she says.” People preparing, sharing, and eating food caught and fished in the wild provide the backdrop for these somber expressions.

Miali-Elise Coley of Iqaluit, a younger person than many of the other speakers, talks about the need to protect the environment for the benefit of coming generations. “Although our elders will pass on, younger generations will inherit the future,” she says. “We must continue to have healthy food from the land: seal, caribou and fish.”

Immediately following her comment, the film shows a man handing a young child to another person on the shore, with a boat and water in the background. Sheila Watt –Cloutier says, “our elders are non-confrontational. It’s not their way to speak aggressively. However, the younger generations are becoming more vocal, and we have to be. We have to think of our children and grandchildren,” she concludes.

According to a press release, the screening will be simultaneously broadcast online (www.isuma.tv and at AmericanIndian.si.edu/webcasts). After the screening, Mauro will be on stage along with a museum staff moderator, plus Kunuk will be connected via Skype, to answer questions from viewers worldwide via the social media networks. The screening will be at 2:00 p.m. on Sunday, March 27, in the Rasmuson Theater at the Museum.

Another press release indicates that the film will be shown in New York City next Thursday, March 31st, at the New York branch of the same museum, the George Gustav Heye Center. The showing, at the facility across from Battery Park downtown, will open the 15th Native American Film and Video Festival.