The Gem Diamonds Company announced last week that it will be helping finance and drill four boreholes to provide water for the G/wi and the other San communities in the Central Kalahari Game Reserve. This latest development appears to be closing a nasty chapter in the history of San conflicts with the dominant societies of southern Africa. 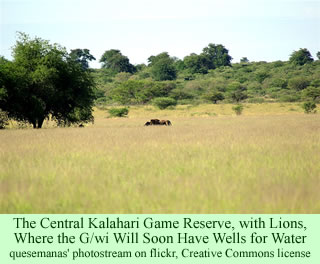 The San peoples, of whom the G/wi are one, were forcibly evicted from their homes in the CKGR a decade ago in order to expedite the search for, and mining of, diamonds in the Kalahari Desert. The Botswana government claimed that it removed the people only for their own good, and that they had willingly moved to the government’s resettlement camps. Some of the G/wi and the other “Bushmen” (San) agreed that life in the resettlement camps was better, since the government was providing more services. Many others strongly opposed the enforced move and wanted to return to their homes.

With the support of the militant British NGO Survival International (SI), the San societies filed a law suit with the High Court of Botswana which ruled, in late 2006, that the claimants did have the right to return to their desert homes. The government accepted the decision, but decided to harass the people by not allowing them to reopen the borehole that it had capped when it moved them to the resettlement communities.

Survival International consistently supported the San in their efforts to win justice for their cause. The organization did not miss many opportunities to issue angry press releases containing a lot of denunciations of the human rights practices of Botswana.

SI also condemned the two companies involved—first De Beers, followed by Gem Diamonds—for cooperating with the government campaigns to deprive the G/wi of their land and their rights. The NGO also tried to shame some prominent personalities for wearing diamonds that may have come from Botswana. SI ratcheted up its campaign against the country last fall by launching an international boycott of all travel there.

Meanwhile, in order to gain water for their communities, the San people filed another court suit, seeking to override the government and allow them to have a source of water near their homes. It was turned down by a single judge from the High Court in July 2010. A further appeal to the Court of Appeals was finally decided in January 2011. That court ruled, unanimously, that the government did not have the right to prevent the people from drilling for water, or from reopening old boreholes. It was up to the G/wi, and the other San, to move forward from there.

The AFP reported on Thursday that a non-profit group, VOX United, will be working in partnership with Gem to drill four boreholes for drinking water in the CKGR. Local communities have been discussing their needs, and Gem Diamonds will provide the technical and financial means to do the drilling.

The company press release, issued on Monday, indicated, predictably, that the new initiative is part of the company’s “corporate social responsibility and sustainability programme aimed at the development of a lasting positive legacy …” The first borehole will be drilled starting in early July 2011, and the other three will follow shortly. The company says that it suggested four dispersed sources of water in order to help prevent too many people from concentrating near a single borehole.

The press release quotes Mr. Clifford Elphick, CEO of Gem Diamonds. He said, in part, “Gem Diamonds remains committed to implementing sustainable solutions to the environmental and community-related issues in the Central Kalahari Game Reserve and embraces the opportunity to continue our work with the local communities and other interested parties to ensure that the benefits of the Gope Diamond mine are [realized] for the community as a whole.”

SI has been strangely silent, for once, about a major development regarding the San situation. There is nothing on their website about this latest news.