An article published in the Wildlife Trust of India website on Wednesday last week indicated that the Paliyan have become caregivers of grizzled giant squirrel babies which fall out of their nests in trees or become orphaned. They are called grizzled because of their whitish fur. 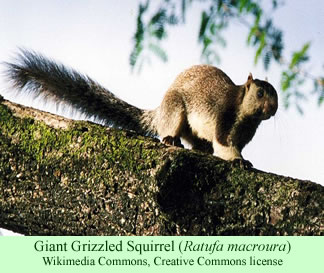 According to the story, the Paliyan in Shenbagathoppu, a community in Tamil Nadu state of southern India, use a paladai to feed milk to the baby animals until they are able to take care of themselves. The Paliyan involved in this project, formerly dwellers in the mountains, now subsist on bee keeping, cultivating crops, and gathering forest products for sale.

A paladai, a small oil lamp used in Hindu temples, is also sometimes employed as a baby bottle for human infants. It is basically a sippy cup that looks a bit like an Aladdin lamp without a lid. They are also being used to some extent for babies in the West.

The Wildlife Trust article indicates that there are only about 500 grizzled giant squirrels left in India, plus a small population in Sri Lanka, due to the loss of their forest habitat. They are the size of small cats, weighing 1 to 1.8 kg (2.2 to 4 pounds) each. The Paliyan efforts for the animals are evidently part of the protection and recovery program of the Shenbagathoppu Grizzled Squirrel Wildlife Sanctuary, an important refuge for the large squirrels. It is also called the Srivilliputhur Grizzled Squirrel Wildlife Sanctuary.

The reason the highly endangered squirrels are doing better is that farmers in the area are shifting from tapioca cultivation to tree crops such as mangos, coconuts, tamarinds, and gooseberries. Those fruits are more profitable, and provide more food and habitat for the squirrels.

The Grizzled Squirrel Wildlife Sanctuary consists of about 480 square kilometers (190 square miles) of hills and valleys next to the main range of the Western Ghats in Tamil Nadu. It is adjacent to other important nature preserves, such as the world-famous Periyar Tiger Reserve to its southwest. Elevations range from 100 meters up to 2010 meters. Numerous other mammal species, as well as over 200 bird species, may be seen in the sanctuary. There are no roads into the forest, so local guides must be hired for visitors who want to trek into the area.

It is not clear if tourists take any interest in the relatively uncharismatic grizzled squirrels—or the Paliyan, for that matter.