Such contrasts. According to news reports last week, aggressive vandals have been attacking an Amish community in Troupsburg, N.Y., while local residents in Fort Fairfield, Maine have been enthusiastically welcoming recent Amish immigrants. 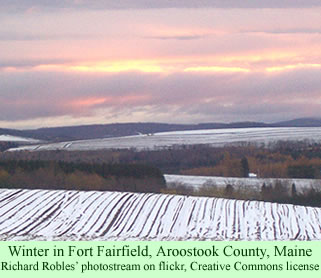 Sheriff Joel Ordway of Steuben County, N.Y., indicates that the crime spree, which began last month, has included an attempted arson. So far, no suspects have been identified. Troupsburg is about 25 miles west of Corning in New York’s Southern Tier counties.

On two occasion, unknown individuals threw rocks at the windows of Victor Green, who lives on Prutsman Road a few miles north of Troupsburg village. The first time, the vandals did not damage anything, but the second time they attacked, they succeeded in breaking his windows. Green said that the Amish house at the top of the hill has been targeted three or four times.

For more than three weeks, vandals have stolen items out of homes, thrown rocks at people, and on one occasion attempted to burn down a barn. While most of the attacks have been against the Amish, they have not been the exclusive targets.

The Sheriff’s office is using night vision goggles and thermal imaging technology to help catch the criminals and put an end to the vandalism. Sheriff Ordway, however, does not think the attacks represent a series of hate crimes, and he indicates that the leader of the Amish community is helping all he can to stop the crime spree.

Hate crimes or not, it is heartening to read from the northern part of the State of Maine that local people in Aroostook County really like the Amish who have been moving into their midst recently. Some 50 miles north of where Interstate 95 ends at the New Brunswick border, a number of Amish families have bought farmland and settled into potato (and snow) country. They are drawn by the remoteness and the lower prices of land, and they are not at all put off by the long winters.

Over the past four years, a dozen Amish families have settled in the area. “They bring out the best in people,” Dan Foster, the Fort Fairfield Town Manager, reports. “They bring out people’s desire to help. I love having them here. They are wonderful people.”

Foster expresses his appreciation for the economic boost the Amish families have brought to their section of the county, but even more important, in his view, is the moral example they set for their neighbors. “They know how to do community, among themselves and the English—how to resolve issues and work together for the common good. There are a lot of lessons to be learned,” he says.

Long-term residents of Aroostook County observe the gentle, collaborative ways of the Amish and are inspired, Foster says. “People are seeing that and it can’t help rub off and make you feel better about your community.”

Steve Ulman, who runs a horse riding stable in Fort Fairfield, has similar things to say about the new Amish neighbors. He feels they have increased the value of land in their area. They are industriously restoring small farms to productivity, and are now raising wonderful crops. He also observes that they are successful in doing what the local people have not been able to do: encourage most of their young people to remain in the area to live their lives. “Their children stay here. They become Amish. That speaks volumes.”

Carla Hayes spoke of how excited she became in August 2007 when she heard the news that three Amish families were moving into her neighborhood. One would be just three houses down from hers. Since Noah and Lovina Yoder moved in with their 11 children, she and her husband have become close friends with them. “Our ways of living are years apart; however, their examples of family, neighbors and community are very ‘today,’ or should I say, the way it should be in our state now,” Ms. Hayes told the paper.

The reporter interviewed Mr. Yoder, who immediately recalled the warmth of his greeting by the Mainers. “We couldn’t have hoped for a better community,” he indicated. “For a whole month, [after they moved in] not a day went by when people didn’t stop by with food or offers of help. We had to improve our way of living. People up here were better at it than we were.” Asked if he was affected by the deep snows, famous in that part of Maine, he replied that their first winter was the best one he had ever had.

They found that northern Maine is really not much colder than New York state where they had come from, and Aroostook County is a perfect place to raise children.

“The earlier you learn to take responsibility the better you are,” Yoder said, speaking about the way his younger children help out by taking care of animals. “There is no manual for raising children,” he added. “What is often missing is real love for children.”

Ms. Hayes added her own bit of philosophy. “There is joy in being able to help. They [the Amish] are the greatest example of what community should be—to help and care for one another.”