Navanethem “Navi” Pillay, the U.N. High Commissioner for Human Rights, visited Oaxaca State in Mexico last week to assess the situation of the indigenous peoples. In the course of her visit, she spoke with Zapotec leaders and encouraged them, particularly the women, to continue to seek their rights. 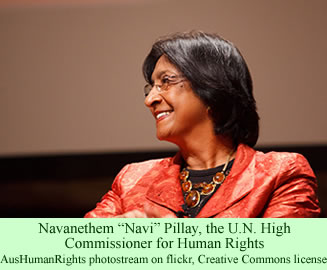 She suggested, according to a Fox News report, that the government of Oaxaca should “acknowledge, explicitly and legally, the rights of the indigenous peoples, to undertake consultations and (achieve) a free and informed consensus.” She told her hosts that when women gain an education, an entire society advances. She, herself, grew up as part of a persecuted, minority group. She was raised in the Indian Tamil community in South Africa, where she suffered discrimination due to her race. She has gotten ahead because of her education and ability.

During her visit to Oaxaca, Ms. Pillay met with Eufrosina Cruz, the Zapotec woman who ran for mayor of her village, Santa Maria Quigolani, in November 2007. The men of the community on the town board prevented her from being elected that fall by tearing up ballots cast for her. She was a woman, after all, so she was not a citizen. Therefore, they reasoned, she could not be mayor. She tried to challenge the system a few months later. Subsequently, she ran successfully for the state legislature where she is now the Speaker of the State Assembly.

Ms. Pillay concluded her visit with a news conference on Friday in Mexico City, at which she issued a lengthy statement about the human rights situation in Oaxaca. She spoke diplomatically about her reception by President Felipe Calderón and other officials, and enthusiastically about her meetings with ordinary Mexican people. She spoke eloquently about the need for Mexico to fight crime at all levels.

She discussed the rights of minority peoples in Oaxaca. “I would like to draw special attention to the situation of indigenous women, who suffer a triple form of discrimination—for being indigenous, women and poor. Just as non-indigenous societies have a long way to go before they achieve gender equality, indigenous peoples also need to give women a more prominent role, on an equal footing with men.”

Ms. Pillay commented during her press conference on her meeting with Ms. Cruz. “The current President of Oaxaca’s State Congress is an indigenous woman. An exceptional woman, she told me how she had to fight discrimination and resistance to her running for office, even from within her own community. I salute her strength and her achievement.”