Deodat Mukankusi told a reporter, “we fled our small village in the woods when men carrying weapons invaded it.” She and about 800 other Mbuti have been forced by the seemingly endless fighting in their original home, the Ituri Forest, to migrate to a refugee camp at Kanyaruchinya, south of Goma, in South Kivu Province of the Democratic Republic of Congo. 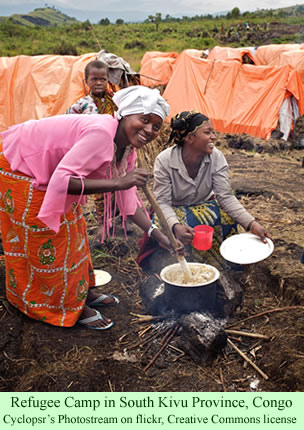 There they endure difficult living conditions—a complete lack of health care, no fresh water, inadequate housing, little food. They are finding it hard to survive, since they face indifference from the government, local organizations, and international NGOs. Ms. Mukankusi and her husband have seven mouths to feed, but he has not been able to find any work and she is only able to secure a little income by making clay pots to sell. She has to go 80 km to obtain the clay for her pottery work. The cost of the transportation eats into her profits.

A local administrator admits that the pygmy peoples have no experience living in mainstream Congolese society, so they are left behind. But Ndeze Paul, the administrator of Bwisha in Rutshuru territory, blames that condition partly on the Mbuti. They previously wanted to live by themselves in the forest, he says.

The Mbuti claim that they are widely discriminated against. Other Mbuti in different refugee camps in the Goma region, such as Mugungu, Hewa Bora, and Shasha, have made similar points. The story is depressingly familiar. The women complain that they are not permitted to use local hospitals, which forces them to turn to traditional medicines when they become ill or when their time comes to deliver babies.

Kahindo Motogari, another pygmy woman, told the reporter, “we also want to live like others, we are not animals, we can live together in peace if for once we’re given [the] chance.” She makes reasonable requests of their government—access to a maternity hospital and schools for their kids.

Mark Lattimer, Executive Director of Minority Rights Group International, says that most of the major NGOs are sympathetic to the problems of the Mbuti. But, he believes, they have to try and deliver services to all the peoples in the Congo—they can’t just pick and choose the individual groups they will assist. He adds that ending discrimination by the local Congolese people will not be easy.

The Congolese “are happy just to ignore the Bambuti, because they’ve had such a subservient role” in society, Mr. Lattimer says. “They very rarely will come and demand their share.” He continues that the Mbuti have a history of being attacked, of being picked on, maginalized, and discriminated against, and they have come to accept a second class social status.

The pygmies in Kanyaruchinya have formed their own organization, the Maison d’Accueil et d’Encadrement des Pygmées de Grands-Lacs, MAEPYGL, to try and help them rebuild their lives. Its mission is to gain access to the same rights as other Congolese citizens.

The governments of North and South Kivu acknowledge that they provide no assistance to the Mbuti. The Minister for North Kivu, Mutete Mundenga, admitted that the government has not given the pygmies much assistance. He did say that it had given them land because it was concerned about the discrimination they face. He is optimistic, in fact, and acknowledges that the pygmies are citizens of the country. “They have a right to life, education and to benefit from all rights according to the constitution,” he said. He plans to personally investigate at the end of the month.

Mr. Lattimer believes that the governments of South and North Kivu Provinces are keys to any progress, though the involvement of the major NGOs will also be important. But he says that a full resolution of the problem will depend on the continued concern and involvement of the pygmy peoples themselves. People become concerned, he thinks, interest flares, but then time passes and everything goes back to the way it was before.

Jean-Marie Bauma, a 40-year old man, has to support nine people who live with him in a small, shabby house. When it rains, the entire house is flooded. He has five small, school-age children who are unable to get any education because the family does not have the funds to pay school fees. The future looks bleak to him, and to the other Mbuti in the refugee camp.