The Amish in Carroll, Holmes, Jefferson and Trumbull counties, Ohio, have become increasingly upset in recent weeks because of aggressive, physical attacks by a break-away group who have religious differences with them. The dissident attackers have been cutting off the hair and beards of the men, and in some cases the long hair of the women. These are serious, degrading insults in the Amish community. 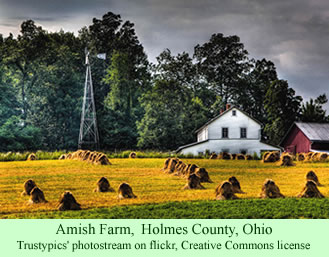 By Thursday last week, a number of news accounts had blamed a small, dissident community of Amish living in a compound near Bergholz, in Jefferson County, where the people operate a leather shop and do carpentry work. Sheriff Fred Abdalla of Jefferson County said that the families that were suspected of perpetrating the assaults committed the crimes for religious reasons. But he was frustrated because the Amish themselves were reluctant to file formal complaints.

Donald Kraybill, the famed Amish expert at Elizabethtown College in Pennsylvania, contacted by the Associated Press, indicated that Amish men typically have long beards and Amish women do not cut their hair. These beliefs are based on biblical teachings. He added that violence by the Amish against one another “is extremely rare.”

The aggressors have typically entered the homes of their victims and overpowered the men in order to cut off their beards. Local police have indicated that some of the men have suffered minor injuries as a result. Locals allege that the bishop of the group in Bergholz, Sam Mullet, is responsible for the violence.

Mullet was the bishop of an Amish group in Fredericktown, but when he ordered the shunning of two families, they appealed his decision. As a result, Amish bishops from across Ohio formed a committee, which disagreed with Mullet’s decision. He was dissatisfied with that, and moved to the Bergholz location in Jefferson County with his extended family and friends.

He allegedly requires his followers to bring back clippings of hair as proof that they have carried out the attacks. Sheriff Abdulla claimed that Mullet had threatened several times to have him killed. He believes that the bishop is dangerous, and he was quoted as comparing the man to Jim Jones, of Jonestown infamy.

Late Friday night, a story carried by WKYC, a TV station in Cleveland, included an interview with Bishop Mullet. He admitted that he knew about the raids, but denied he had anything to do with them. He said he might know some people that were involved, but that he had talked with them.

He told the reporter that whoever was responsible for each attack, the motivation was religious, not criminal. He said he couldn’t understand why the county sheriff “has his nose in our business.” It all started out over an excommunication of members who “weren’t listening or obeying our laws.” He continued, “I didn’t know the courts could stick their nose in religion, but that seems what they did here.”

He got defensive with the reporter. “I don’t work any different than any other bishop, but I’m pointed out and held way up here for being the meanest one of the bunch,” he said. He went on to say that his strict beliefs have prompted others to suspect him for years. “They’ve been after me since what, 2003, trying to put me in jail or in a mental institution,” he said. He added that he had a long-standing feud going with Sheriff Abdalla. He alleged that other Amish were paying the sheriff to be against him, and he acknowledged that he had heard the rumors that were being spread about himself and his family.

The reporter quoted him further: “They said I was being bad to my daughters, forcing them to have abortions and stuff. That we had children who weren’t healthy and I was killing them and burying them. But there’s no evidence of that. We’ve had social workers down here time after time, checking into our grandkids. Look at them. I was supposed to have been punching them. Do you see any black eyes? I was supposed to have done all these horrible things to my wife and my nephews.”

The four men allegedly went by truck to the home of Myron and Arlene Miller, on Saltcreek Township Road, just north of Mount Hope, around 9:00 p.m. They told Mr. Miller they wanted to discuss church business with him and his father, and waited until he got dressed. They went together to the nearby grandfather’s house. After a few minutes of polite chit chat, one of the men stood up, announced that they were there on behalf of Sam Mullet, “in retaliation for the church shunning them.”

The four allegedly pushed and shoved both men, plus another who had come down the stairs. An additional 24 men were in a horse trailer behind the truck. The four aggressors used scissors and hair clippers to remove the beard on the elder man, and some of his hair.

As Mrs. Miller tells the story, “the guys came up and surrounded him and cut off a chunk of his beard. They were unable to get any more because he struggled so hard against them.” She added that the attackers told them, “this is to uncover sins, and it’s to straighten us out.” The men then shaved her head.

While the Amish traditionally work out their differences among themselves quite peacefully, and normally do not let the local plice become involved with their problems, the Millers were very upset. “This is not a religious fight,” she said. “We believe we’re in danger. They’re like hate crimes. They’re terrorizing people and communities.” Mrs. Miller alleged that Bishop Mullet was using sleep deprivation techniques to help brainwash his followers.

Bishop Mullet on Friday night denied that he was personally involved with the most recent attack. He maintained once again that since these were religious disputes, the police had no right to become involved. Over the weekend, one of the four accused men, Lester M. Miller, was released. He had been mistaken for one of his brothers, who was still at large.