Last Friday, AllAfrica.com, an important source of news about Africa, carried a story about the cultural diversity of the Rukwa Region of Tanzania, particularly the Fipa people—or Wafipa, as they are also called. 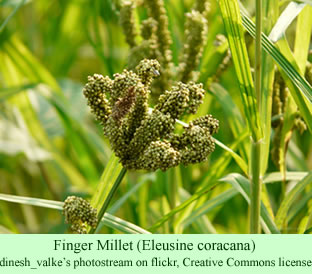 An article by Willis (1989a) indicated that finger millet (Eleusine coracana) was the primary staple crop of the Fipa, but according to the current news article, their foods now also include rice, beans, round potatoes, wheat, sorghum, sugarcane, groundnuts, sweet potatoes, cassava, and the meats from a variety of domestic animals. This suggests that perhaps the extent and variety of vegetable foods has increased in the intervening decades, though Willis was not trying to provide a comprehensive listing.

Sosthenes Mwita, the reporter, added that the Fipa in some areas consider rats and mice to be a delicacy. They cook a stiff porridge called ugali from their finger millet, adding beans and bits of mouse or rat meat to give it zest.

The reporter interviewed a 71-year old farmer, James Tuseko. He told him that most of the Fipa households raise an average of 12 head of cattle. However, the man added, the people do not drink the milk. It is fed to housecats and dogs. He said that bumper crops of rice and maize are normal occurrences in their communities, an assertion that was corroborated by a different report a few months ago, also in AllAfrica.com, about the agricultural bounty of the Rukwa Region.

The journalist suggested that the diversity of cultures and languages in the region could argue for investments in cultural tourism. In any case, he points out, the name for the administrative centre of the region, Sumbawanga, comes from the name of a village located at the same spot before 1914, “Sumbu Wanga,” which translates to mean “discard your amulets” or “do not come here with fetishes of witchcraft,” in the Wafipa language. Mwita admits that he finds this aspect of the Fipa culture to be “intriguing.”

A history booklet that he has consulted says that the Fipa 100 years ago feared strangers, who might be skilled witchdoctors who would commit awful atrocities. The name of the village was thus an attempt to warn strangers against bringing the tools of their witchcraft into their midst. They might, after all, run into the local witchdoctors who could combat them.

Anthropologist Roy Willis gives a somewhat different impression of Fipa history. According to his 1989 article, the Fipa of the late 19th century were described by European visitors as friendly, talkative with strangers, outgoing, good-hearted, self-possessed, placid, energetic, and industrious.

In a 1985 article, he maintained that Fipa ideology does not really focus on opposite categories or on definite conceptual boundaries, us versus strangers. It emphasizes, instead, complementary, unitary processes. Their major legend is about a mythic king of Ufipa who lost his kingship while out hunting to three women, all of whom were strangers. They represent the Earth. The king subsequently reached an agreement with the women that he could retain his office and title, but they would retain some rule over most of the territory.

This myth symbolizes and explains many of their attitudes, Willis (1985) argues. It suggests that their society lacks categorical distinctions. This lack of categories results in people being courteous to strangers. A lack of categorical distinctions also results in the fact that men and women eat together, an unusual condition among African societies.

Furthermore, Willis argues, instead of focusing on division and dualism, the Fipa emphasize processes that promote unity. Rather than transcend duality momentarily, as other societies do through ritual, the Fipa villages regularly, and continually, strive for unity and harmony. None of this denies that a fear of witchcraft is also part of their culture.

Friday’s story includes a variety of cultural information about the Fipa. Despite the famed generosity of the people, it indicates that the men will turn quite hostile if you try to steal or vandalize any of their property, especially the produce from their farms. Also, they believe that any man who tries to steal the wife of another will be hit by a thunderbolt.

Mr. Tuseko, the farmer, cites an episode, apparently widely repeated, of how an offensive, corrupt policeman who had harassed villagers was struck down during a soccer match by a bolt of lightning while seated among a crowd of spectators. Others around him were slightly injured. “He was the only one who was singled out for death,” Mwita writes.

The journalist also writes about the Nsimba, a Fipa dance. Ms. Nakama Nachirima, a 64-year old former dancer, described the dance to him. The performers stand next to stools which are perched on upside down pots, which are balanced on their upside down lids. The performers twitch the stools with their legs in order to make the stool legs tap on the pots, which rattle on their lids. Each pot, agitated rhythmically through its stool by the performer, makes different, melodious sounds depending on its size.

The women dancers shake their shoulders, stomp their feet, and nod their heads in time with the rhythm of the twitching pots. As the dance heats up, men will also join in with the dancing. The continuing vitality of Fipa culture comes through convincingly in this news report.