Many lingering views of cute kids highlight a charming video of the Chewong community located at Lanchang, next to the Kuala Gandah Elephant Sanctuary in Malaysia’s Pahang State. 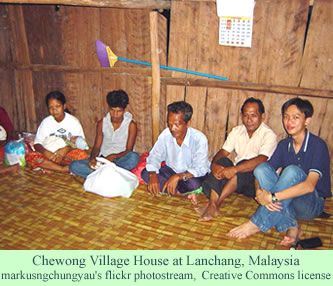 Uploaded to YouTube last Thursday, January 26th, the video shows scenes of the community: adults raking their gardens, kids mugging for the camera, men cutting grass with machetes, kids smiling at the photographer, people planting their gardens, folks caring for their crops, and so on. It’s an interesting production if you like grinning children.

The video, titled “Highlight of Che Wong tribe at Kuala Gandah Lanchang Pahang,” has a music accompaniment but, unfortunately, the only narration is by various academics speaking in Malaysian, with no translation. The Highlight Documentary was produced by Telunjukanan Creative Photography.

A news report nearly two years ago described the construction of a visitor center at the village, so the Chewong could more effectively attract some of the tourists who visit the nearby elephant zoo. It is good to see even a brief, 3 minute 45 second, video of the community.

A visitor to this website, Steve Goodall, recently alerted us to the existence of a video about Ifaluk Island which he put up on YouTube on December 31, 2011. Goodall is an activist and filmmaker who sailed his 34 foot sailboat to Micronesia. His video, obviously shot from the deck of his sailboat, looks down at four Ifaluk kids sitting in a small outrigger canoe singing. The work, called “Someplace with a Mountain,” is a subtle plea to stop global climate change, which is causing sea levels to rise, which is flooding out a wonderful place that produces such unbelievably charming children.

Actually, the brief video is related to a longer, 21 minute documentary on Vimeo, also titled “Someplace with a Mountain” by Goodall. He realized during his travels through the Pacific that the rising sea levels were affecting all of the low lying atolls in Micronesia and he decided to make a film to try and help out. It is a powerful documentary.

A commenter on the YouTube site wrote about the Ifaluk children, “This is one of the most beautiful videos I have ever scene. Stunning!” It is impossible to disagree. The message in the Ifaluk video is powerful, in large part because the four children are so unaffected. They are not begging, not really even smiling for the camera, though a couple of them glance briefly up at the cameraman.

One of the girls is bailing water out of the little canoe during the video—one wonders what would have happened if she had stopped. The kids are just singing a song, which gets better and better as they go along. The song isn’t translated—it doesn’t have to be. The message focuses on the kids—and on the future of humanity on the earth. Both of Goodall’s productions are quite moving.