Some of the G/wi who have returned to the Central Kalahari Game Reserve have mixed feelings about conditions in the bush, though they don’t miss the alcohol and violence of the resettlement communities they left behind to return to the desert. 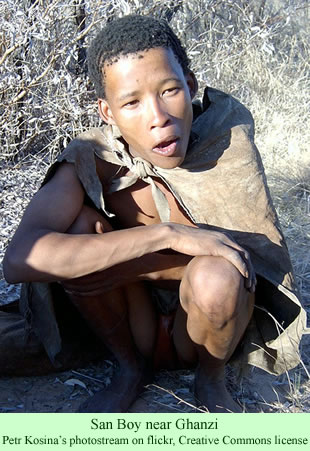 The residents of Molapo appreciate the quiet in the CKGR. According to Rebecca, who is in charge of the community while her husband, Roy Sesana, is away, the town of Ghanzi where they had been resettled was very different. There, she says, “they are fighting and drinking. Here there is no noise.” She clearly does not miss the bars, and she appreciates the fact that people can find vegetable foods nearby.

A reporter from AFP visited the CKGR to see how the San people, referred to as “Bushmen” in this article, were adapting to the desert, and how the drilling for water was coming. A woman named Nono was eager for the water to start flowing. “My life is going to change because I’m going to bathe my baby, our clothes, and then our animals will also drink water,” she said.

A young, pregnant teenager confessed to having mixed feelings about the new life in the bush. “It’s the land of our ancestors,” she said, but she admitted she misses the trappings of modern life in Ghanzi—schooling and playing with friends, toys, and dolls. “Here we are in the bush and have to work.”

She admitted to being nervous “because there are witches and spirits.” She also missed the availability of nearby doctors. She couldn’t imagine relying on traditional healers and herbal medicines when she goes into labor. The reporter indicated that the residents want a clinic and a doctor, something that there is little likelihood the government of Botswana will provide, as opposed as they have been to the people living in their traditional homes.

The AFP report describes the lengthy battle, covered by many news stories over the years, between the Bushmen—the G/wi and other San groups—to reclaim their rights to leave the squalid lives in the resettlement camps and to live in their former settlements in the desert. Some of the details the AFP provides are interesting.

The article quotes Matsipane Mosetlhanyane, from of Kikao village, who said that officials at one point told them to stay away from the animals “because this is a tourism area.” He went on to describe his encounter with the Botswana officials.

“First they tried to force me to move, I refused. They ended up getting inside my hut and put my things inside their trucks. Then they moved me from CKGR. They said they were going to develop us.” In December 2006, the Botswana Supreme Court ruled that the government had to stop preventing the San people from returning to their rightful homes.

However, the government did its best to hamper their moving to the desert by refusing them the right to have boreholes for water. The people again appealed to the courts and finally, in January 2011, the Court of Appeals ruled that they could not be prevented, at their own expense, from drilling wells at their communities. So the AFP reporter visited the site of the water drilling next to Molapo.

Wikkie du Plessis, who was operating the drill for the NGO Vox United, which is coordinating the effort, was not having any success. “It’s full of sand,” he said about his work so far. “I don’t know how it got in here. But there is not enough water … It’s a pity, a big pity.” AFP concluded that the San people may have to go on scavenging for water for a while.