The work of numerous Kadar in helping ornithological research on South Asian hornbills has inspired them to formally request greater involvement in the overall management of forest resources in Kerala. The Indian Forest Service appears to be favorably inclined to support their initiative. 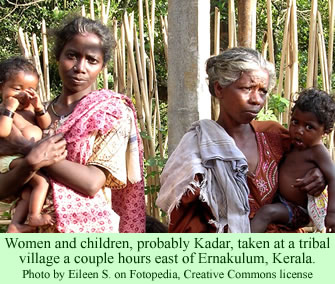 The Deccan Chronicle reported last week that eight Kadar communities in the Athirappilly gram panchayat had filed an application to the secretary of the Indian Forest Service. They asked to be designated as the managers and protectors of the forests in their region. They also requested the legal right to collect forest products, something they have done for millennia.

The paper indicated that officials in the forest department support the Kadar, due to their active involvement in existing projects, such as the research on the hornbills, which has been described more fully in earlier news reports. Their assistance in the hornbill research has also gotten them involved in forest plantation work, fire protection, and eco-tourism, all with the support of the forest service.

M. Manikyaraj, a Kadar, said that the law—the national Forest Rights Act—should allow them the rights to manage four forest ranges in the Vazhachal Forest Division: Chapra, Vazhachal, Kollathirumedu and Sholayar. Apparently about 1500 Kadar last week attended a meeting in Thrissur, a major city in Kerala, where they passed a resolution demanding their rights to manage the forest resources.

The full, correct, name of the Indian law is the Scheduled Tribes and Other Traditional Forest Dwellers (Recognition of Forest Rights) Act of 2006. It has been a highly controversial piece of legislation, pitting forest and wildlife protection advocates against those who try to promote the interests of the many tribal societies that live in or near forest lands. The law gives rights to the so-called tribal peoples to lands from which they have traditionally taken minor forest products for their own uses or for sale. It seeks to preserve the rights of the tribal peoples to protect, conserve, manage, settle in, and own forest lands.

An unnamed forest official expressed his support for the Kadar objective. “The main aim of the [Forest Rights] Act is to ensure stability of [the] habitat of primitive tribes,” he said. “We will soon set up an ecological monitoring protocol to prevent excessive exploitation of forest resources.”