The Chewong of Malaysia experience, or at least they used to experience, absolutely no violence within their society. They see themselves as peaceful and timid, people without leaders, individuals who forage for their needs in the forests. In contrast, they view others, primarily neighboring Malays and Chinese, as violent, fearless, powerful, demanding and angry, people who live in settled villages. In essence, the 400 or so Chewong are clearly aware of the many ways they differ from their close neighbors. 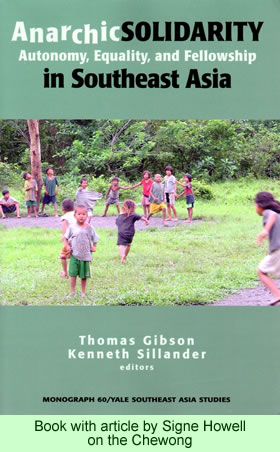 A recent article by Signe Howell updates her earlier writings about this Orang Asli society that she has studied extensively for 35 years. She writes that she has followed up her original 18-month field work among the Chewong, from 1977 to 1979, with 10 subsequent trips to visit with them, each lasting from one to three months. Her most recent visit was in 2010. She not only provides a clear overview of the ways the Chewong are trying to retain their peacefulness, she also gives a good update about the changes they are experiencing.

One of the many interesting observations she shares is that they have no interest in accepting leaders. They are highly egalitarian and strongly believe in individuals doing their own thing. They do not cooperate in group economic activities, with men hunting alone and women foraging by themselves. A woman may plant some cassava roots herself, and she then digs, soaks, grates and bakes them alone, though she may work in a parallel fashion with other women doing the same tasks.

While they pursue economic activities alone, they still have a strong sense of their group, which is based on their common mythology. Their understandings of the universe form the basis for their ethical system of sharing and their sense of group solidarity. Their myths and spiritual rules undergird their peaceful ethos. Children learn to not break social rules or else they will provoke the displeasure of cosmic beings. A severe thunderstorm may represent divine retribution for a variety of infractions of the rules.

These factors, combined with their concept of themselves as people who are fearful and self effacing, prompt them to maintain their peaceful social system in the absence of any leadership. They believe they share their peacefulness and timidity with the natural forces that surround them. The women wear leaves in their waist bands, or flowers in their hair, in solidarity with the gentle leaf people that they wish to emulate.

The Chewong firmly maintain an egalitarian spirit. When Howell commented on the skills of one of the hunters, she was quickly corrected, told that all men are equally good in hunting. In that same spirit, children are left alone to do what they wish. Adults share forest produce without restraint. Foods are brought back to the community, cut into small pieces, and shared immediately with everyone who happens to be present.

If a large animal such as a pig were brought into a community, the meat would be butchered, cut into small portions, and shared completely. They are fanatical about sharing their tobacco with others in a group gathering. When they get together, without outsiders present, they roll cigarettes and pass them around, signifying with their sharing that they all belong to a unique group of people—us, Chewong. The process of sharing signifies belonging.

Another factor that helps promote their peacefulness is that people can never perform any act of retribution for incorrect behavior by others. Instead, a being in the forest, or in the cosmos, must do the job.

But Howell also describes changes that began creeping into the Chewong world in the late 1980s. Loggers moved into their territory and government agents began pressuring them to move into permanent settlements. They were urged to grow crops. Government agents provided them with housing and fruit trees. Out of fear of the power of the agents, many Chewong attempted to do as they were told. But some of them soon abandoned the fruit trees and houses and returned to the forests in which they felt more comfortable.

Nonetheless, there is, today, a gateway village with about 100 residents who are more or less permanently settled. They grow foods in the same fields, year after year, though more for sale to outsiders than for their own use. The people are slowly entering the money economy, and some are energetically accumulating cash and goods, consuming in some cases more than their peers. While many Chewong frequently go into the forest for foods and other produce, others have completely abandoned the forest-based economy in pursuit of consumption.

Money, and the things bought with it, are generally outside the previous rules of sharing and exchange. Food that is purchased is often not included within the rules, but the situation is ambiguous. People who live in the forest will still share foods that they buy, but those who live in the permanent village will not. Purchased consumer goods, such as motorbikes, clothing, and electronic devices, are clearly owned individually.

Thus, inequalities are arising, particularly regarding gender roles. Instead of a sense of equality, with men and women both bringing in foods from their work with their blowpipes and digging sticks, men are sometimes now the sole breadwinners, able, from their earnings, to buy all the food and goods the family needs. As one might expect, there are now some reports of violence, young men against their wives.

Inequalities in wealth are appearing to exacerbate social tensions. However, someone who has earned a lot of money does not gain a higher social status. The individual earns, instead, more social uncertainty and ambivalence. Young people, furthermore, as they gain some education, are losing the traditional knowledge of their parents. They are not retelling their myths as much as they used to. Due to frequent interactions with outsiders, the Chewong are beginning to lose their timidity.

But while Howell reports these disturbing developments, not all of her report is downbeat. The Chewong still have no need for, or belief in, leaders. They still have a strong egalitarian ethos, a communitarian spirit, and no political systems. To a considerable extent, their society is still based on the forest. She concludes that “many regret the passing of the old way of life, and many return to the forest for short or long periods … where they take up the old practices of hunting, foraging, and sharing (p.57).”