The tribal people of Lohardaga district in India’s Jharkhand state, particularly the Birhor, have been suffering lately from attacks by Maoist guerilla groups. The latest strategy by the terrorists has been to forbid merchants from entering the local villages. The guerillas also demand levies from both the local people and the outside traders. 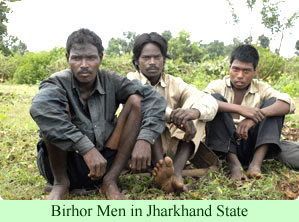 They appear to have figured out an effective way of disrupting the lives of the rural people. Village farmers derive much of their income from the sale of the vegetables they grow, which then have to be taken to urban markets to be sold. Due to the threats of violence from the guerillas, vegetables from village farmers now rot before traders can buy them.

The Birhor derive income by gathering minor forest products and fabricating them into items, such as ropes, for sale in the village markets. These items, too, cannot be sold with the ever-present threat of guerilla reprisals. Traders from larger communities in the state have basically stopped coming to the local markets in Lohardaga.

Sandip Kujur, from the village of Tissia, indicated to a reporter from the Times of India last week that the people now have to travel 25 km just to purchase basic, everyday items. A local trader, Jamil Ansari, said that the markets are virtually deserted with almost nothing for sale, in comparison to the normal crowds of people.

However, Beni Lal Rajak, a local official, expressed optimism that government attempts to provide security for the village markets will change the situation. The Times of India reporter did not provide any information to indicate that the government is really doing anything to help the villagers.