On Monday last week, Egyptian President Mohamed Morsi received a delegation of Nubians from southern Egypt who presented a variety of demands that, they said, had been ignored by former President Hosni Mubarak. Further, they expressed their disappointment that there have been no changes in their situation since Mubarak’s regime fell over two years ago. 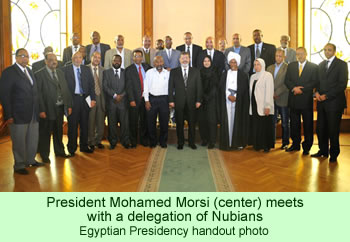 They also demanded that the government should help Nubians who had been forced out of their homes along the Nile River many decades ago to be resettled along Lake Nasser. They asked the government to develop better infrastructure in Nubian villages. Furthermore, the delegation suggested that Nubian women should be encouraged to enter Egyptian politics, which would thus help empower them.

The delegates told the president that their demands were quite reasonable since they had been marginalized by the larger Egyptian society for so long. Egyptians have not, they said, paid much attention to their concerns.

They brought numerous specific issues to the attention of the president. They complained that many of the houses they had been given when they were relocated were dilapidated and needed to be rehabilitated. They also said that 12 villages had sanitary drainage problems, and that village health units were needed. They urged the construction of a sugar cane factory to provide employment for Nubians.

On a long-term basis, they urged the creation of a higher level group that would expedite the resettlement of the Nubian people along the banks of Lake Nasser. They also suggested the adoption of a bill about resettlement as a way of finally compensating them for the fact that their homes and villages had been expropriated for the construction of the Aswan Dam in the early 1960s.

President Morsi responded that he would urge his government to raise the Nubian concerns at a meeting of the Shura Council, the upper house of the Egyptian parliament. The president also asked the delegates to form a small committee of Nubians that could continue to work with the president on the concerns and demands they had expressed in the meeting.

Following the meeting, the president reportedly vowed to seek an end to the marginalization that the Nubians have suffered in Egypt.