The Eurasia Review last week analyzed the effects that increasing tourism and military deployments in northern India are having on the traditional Ladakhi way of life. Widening economic gaps between rural Ladakhis and urbanites in Leh, the regional capital, are one of the problems the article identifies. 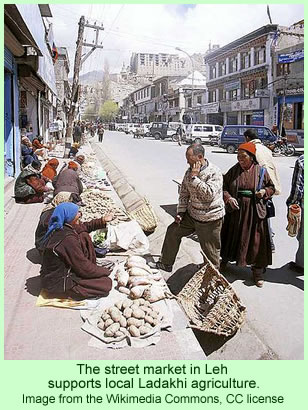 Traditional agriculture, as described by Norberg-Hodge, Mann, and other writers, has been the essence of the economy and social structure for centuries. People lived in small communities growing crops and storing foods for the long winters. However, the advent of tourism, starting in 1975, began to change their traditions, as farmers had to adjust crops to meet new demands.

The opening of Ladakh brought not only tourists but consumer goods, imported foods, western educations, and the global media. Ladakhis gained romanticized impressions of the outside world from brief encounters with tourists, while their attitudes were changed by access to the media.

Ladakhis living in many areas of the region to this day have little contact with the tourist industry. Developments and changes are occurring in areas where the tourists visit but not in the rest of the region. As a result, people from those other areas are moving into Leh and vicinity for employment, thus reducing the numbers of people involved with farming. Ladakhis in Leh are competing with one another for scarce jobs.

The increasing presence of the Indian Army in the region has also had an impact on Ladakh’s economy. The army employs large numbers of people to raise food, work on roads, and provide porter services. It supports hospitals, schools, and computer centers. In the Nubra Valley, to the north of Leh, young people leave their farms to work for the army, then drift into Leh to spend their earnings.

Previously, the army bases were concentrated along the border areas with Pakistan and China, but today they are spread widely throughout Ladakh. They are even in the Zanskar Valley, in southwestern Ladakh, fairly distant from the border regions.

The article last week in the Eurasia Review takes up the call of economic localism, an idea advocated by Norberg-Hodge, who proposes that everyone will benefit from relying as much as possible on locally-raised foods and products. That way, the imbalances caused by the consumption of external goods will be redressed, at least to some extent.

The article also suggests that Ladakhis should explore alternative forms of traditional agricultural production—such as growing fruits, exotic vegetables, herbs, and flowers. The author is confident that agriculture will remain a stable, long term basis of the Ladakhi economy, despite the fact that tourism, army employment, and government jobs will not go away.

However, educated young people are increasingly apathetic toward agricultural work. The changes brought about by the opening to the outside world can’t be reversed, but the author urges the Ladakhi people to preserve the best of their economy, the agricultural base, and to thus prevent the traditional society from disappearing completely.