One of the best features of the 1980 film comedy “The Gods Must Be Crazy” was the way Xi, the Ju/’hoansi hero, was valued for his ability as a tracker. Tracking skills continue to be important in that society. According to an interesting news story last week, three Ju/’hoan trackers from Namibia have recently been engaged by some German scientists in a project that is trying to track the ways of early Europeans. 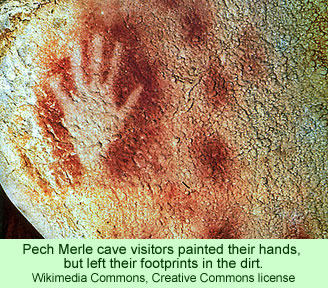 Some famous caves in southern France preserve prehistoric rock art and, less well known, human footprints which have not hitherto been analyzed by individuals skilled in interpreting them. Tilman Lenssen-Erz from the University of Cologne and Andreas Pastoor from the Neanderthal Museum, also in Germany, invited the three Ju/’hoan men from the Tsumkwe area to visit France and see how they would interpret the evidence about what the ice-age Europeans were actually doing in the caves—in addition to painting on the walls.

They brought /Ui Kxunta, /Ui Ga!o and Tsamkxao Ciqae to Europe with the basic research premise that while scientists can analyze and measure many things, people with skills in interpreting human movements based on their tracks could provide invaluable insights into what the Europeans 17,000 years ago were actually doing.

For the Ju/’hoansi, tracking used to be, and to some extent still is, an important aspect of their hunting, though today the three men mostly use their skills for tourists and trophy hunters. The Ju/’hoansi hunt large animals such as various species of antelopes with poison arrows. They have to be able to follow the footprints of the wounded animals across the bush for many hours until they finally drop to the ground and die. Human survival for eons has depended not only on their skill in shooting animals, but also on their ability to track them and retrieve the meat.

That incredible ability extends to tracking humans and interpreting what they have been doing, a skill which, in fact, helps foster their famed peacefulness. In 1960, Lorna Marshall pointed out an interesting observation she had learned from her friends. Everyone has unique footprints, the Ju/’hoansi told her, and they could normally distinguish which individuals made which tracks. It was thus impossible to conceal what one had done, which helped prevent stealing.

A few months ago, the European participants in the project met the three Ju/’hoan trackers in Namibia to get acquainted. They took some trips into the bush near Tsumkwe, the town at the heart of the Nyae Nyae Conservancy of the Ju/’hoansi, where the Ju/’hoan men demonstrated their tracking skills to the other project participants. They also visited a cave in northern Namibia, to familiarize the trackers with the environment they would be encountering in southern France.

They then visited a couple petroglyph sites in Namibia, one of which includes depictions of animal tracks. After a press conference in Windhoek, the group left for Europe.

They visited the zoo in Cologne to give the three trackers the chance to observe bears, animals they were not familiar with and whose tracks they needed to be aware of. Then they drove to southern France to visit four different caves. At the cave of Niaux, they inspected 24 footprints and the Ju/’hoansi men concluded that the tracks were made by a girl of about age 12. They rejected the opinions of some archaeologists who had identified them as having been made by several people doing a ritual dance.

At the Pech Merle cave, archaeologist had identified a group of footprints as having been made by one or possibly two people, but the San trackers identified five different individuals as having walked over the area in question. At the cave at Fontanet, they found that the tracks of 17 different people had been preserved. Some scholars had thought that the prints of a shoe were visible, but the trackers found toe marks, which discredited the assumption that at least one of the early Europeans may have worn shoes in the cave.

One area in the last cave they visited, Tuc d’Audoubert, contained a maze of dozens of footprints—but the tracks seemed to include only heels. The tracks are located on the side of a pit. Archaeologists had identified it once again as a possible site of a ritual dance. The Ju/’hoansi trackers said no, they were the tracks of a man and a boy who had walked twice into the pit to extract clay. They showed the scientists where the people had knelt down, with their bare knees pressing into the earth—showing, incidentally, that the cave visitors had not been wearing pants at that point in time.

The scientists were impressed that the Ju/’hoansi trackers did not speculate on what they were seeing. Instead, they relied entirely on the facts that they saw in the tracks. Assistants recorded in their entirety the discussions among the three trackers held in their own Ju/’hoan language for subsequent transcription by the Ju/’hoan Transcription Group in Tsumkwe.

A TV filming crew accompanied the project participants, both in Namibia and in Europe, with the intention of producing a 90 minute documentary for the French-German TV channel Arte in 2014. Project leaders also plan to prepare an English language version, so the Ju/’hoansi themselves will be able to show it in their villages in the Tsumkwe area.