The Piaroa in Venezuela have been protesting earlier this year about the dangers of mining in their territory, but a different threat to their security has also arisen. A news story early in November and another last week report that the problem of guerilla violence has arisen in the borderlands with Colombia. 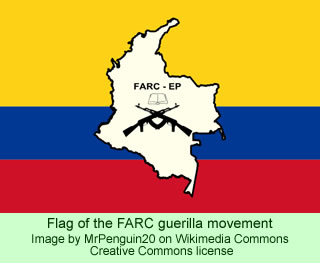 The Economist reported on November 6th that the FARC guerillas from Colombia have been taking refuge in neighboring Venezuela, especially in Piaroa territory and surrounding lands. FARC, the Revolutionary Armed Forces of Colombia, and the government of that country have been sluggishly involved in peace negotiations for several years.

According to the Economist report, the movement of the FARC guerillas into Venezuela began as a tactical retreat from the Colombian military, but it has grown into a large scale criminal conspiracy, with the civilian and military authorities of Venezuela involved. The local people, particularly the Piaroa, are affected.

The Economist alleges that the Venezuelan government denies providing refuge for the FARC guerillas, and the government of Colombia, intent on trying to improve its international relations, has not been pursuing the matter. The Venezuelan national guard is ignoring the smuggling, border security, and other issues involved with the FARC operations in their country.

According to several sources—the governor of Amazonas State, the Catholic Church, and the indigenous groups—FARC is pursuing its smuggling and mining activities in Venezuela quite actively. Smuggled goods include gasoline, foods, coltan, guns, and cocaine. Local people say that FARC has established camps, convened village meetings, and tried to take over communities.

The State Governor, Liborio Guarulla, reports that FARC activities have even been conducted just outside the state capital, the city of Puerto Ayacucho. “They have held meetings with local leaders and business people to extort money,” he says.

Guillermo Arana, a Piaroa leader who is the head of an indigenous umbrella organization, ORPIA, believes that the Venezuelan armed forces are complicit in the FARC operations. The guerillas and the army personnel all exploit the local people who work in the illegal mines by taxing them. “It’s the indigenous peoples that pay the price. The miners have no problems with the authorities,” he says.

Last week, the Inter Press Service, a worldwide news organization concentrating on the global south, carried a similar report on the situation. The reporter talked with several indigenous leaders who repeated the concerns expressed by their people earlier in the year about the dangers of unfettered mining in their territories.

The IPS story quoted Mr. Arana on the threat of mining exploration by Chinese interests. “The only way for us to survive is to defend the environment, our habitat; as guardians of the Amazon we are helping to save the planet,” he told the reporter.

State governor Guarulla told international correspondents that the FARC guerillas act as a vanguard to protect the illegal mining business, and in the process they damage the environment and violate indigenous areas.

According to the IPS report, representatives of FARC had met with Piaroa communities in May. At that meeting, the Piaroa asked them to leave their territory. José Carmona, a Piaroa shaman and leader in the community of Caño de Uña, told the reporter, “the guerrillas have come here to tell us they are revolutionaries fighting against the empire. But we are peaceful people, we don’t want weapons—we want to live peacefully in the territories that belong to us.”