An AP report last Thursday explained that the recent protests in Thailand have been caused by deep divisions between the peaceful rural Thai and urban residents of the country. Protesters in Bangkok resent the elected government of Prime Minister Yingluck Shinawatra, the sister of exiled former Prime Minister Thaksin Shinawatra. He was driven out of office in 2006 by a military coup, and the protesters want to remove her from office also. 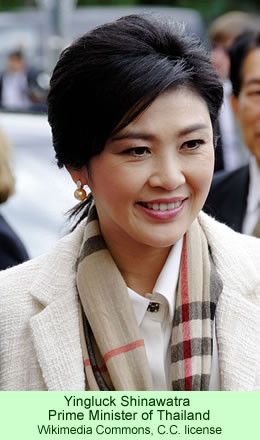 The story makes it clear that in rural Thailand, Thaksin is still considered to be a hero for advancing the interests of the poor. Despite his evident corruption—he became a billionaire businessman—it was his unwavering support for the rural poor that earned him the enmity of urban elites and their followers.

The journalist visited the village of Kambon, in rural northeast Thailand, and interviewed villagers. A retired primary school teacher, Pichai Poltakland, told the reporter that Thaksin brought paved roads, low cost education loans, health care that is almost free, and old age pensions to the village, programs that didn’t exist before his term in office.

Thaksin bridged the huge divide between the urban elites that have traditionally ruled the country for their own advantage and the rural poor who finally gained government benefits during his period in office, 2001 – 2006. Despite now living in self-imposed exile, he remains massively popular in rural Thailand. Tens of thousands of villages like Kambon, millions of people, still support the former prime minister—and his sister, the current Prime Minister.

No one in rural Thailand is advocating violence, but the threat is implicit. A middle-aged rice farmer, Thongplean Boonphunga, told the AP, “across the northeast we can seize every government office in every town, in every city, in every province.” The urban elites may deride Thaksin supporters as country bumpkins, but the rural poor have the numbers on their side.

The perspective of many in rural Thailand is that while the countryside was bypassed as economic progress came to the cities, all that changed when Thaksin assumed power. He was from the north himself, made his fortune in telecommunications, and entered politics. The rural people see him as a man who came from their background, understood their problems, and attempted to help them. “The Thaksin government gave them concrete moments in their lives,” according to David Streckfuss, an American scholar living in Thailand.

The trouble started last month when Yingluck’s Pheu Thai party began pushing an amnesty bill in parliament which would have allowed Thaksin to return from exile. Anti-Thaksin factions in Bangkok started protesting. The street protests last week have captured international headlines, but the demonstrations have been remarkably restrained, considering the animosity of the protesters.

However, on Sunday last week, December 1, the situation in Bangkok finally became violent. Police started using force to contain the protesters, who carried rocks and petrol bombs to try and battle their way into government buildings. As of Sunday night, four people were killed and 103 injured. Protesters issued an ultimatum for the Prime Minister to resign, which she refused to do. On Monday, they continued throwing rocks and bottles at the police lines, and the police began using rubber bullets on the mobs. Suthep Thaugsuban, the leader of the protesters, on Monday called on his followers to “wage war on the police.”

Analysts feel that the protesters were attempting to bait a heavier response from the government, thinking that a bloody police reprisal would escalate the crisis and strengthen their hand. Thitinan Pongsudhirak, a scholar at Bangkok’s Chulalongkorn University, argued that the government’s best strategy was to do nothing, since the birthday of the king was coming up later in the week. No one would want to protest during the holiday.

Suthep and Yingluck had met on Sunday. Suthep advocated a complete abdication of the government in favor of an unelected “people’s council”, which would rule in place of the constitutional government. Yingluck expressed willingness to negotiate with the protesters, but she refused to give up the parliamentary government and the democratic constitution of the country. Her response was quite diplomatic: “At this point, we don’t see how we can make it happen under this constitution,” she said.

Then, to further combat the continuing protesters, the Yingluck government took a novel, much more peaceful, approach. On Tuesday, December 3, it removed the barriers and the barbed wire. Riot police lowered their shields and opened the doors to a police compound that the mobs had vowed to besiege. As protesters entered the compound, police officers greeted them politely and posed for pictures with them. The police then opened the gates to the prime minister’s office.

Kamronvit Thoopkrachang, Bangkok’s chief of police, told Reuters, “in every area where there has been confrontation, we have now ordered all police to withdraw. It is government policy to avoid confrontation.”

Tens of thousands of protesters were allowed to occupy buildings in downtown Bangkok, with the police standing by quietly. Crowds grew in the evening, forming a carnival-like atmosphere. Demonstrators offered free food and foot massages, as the protesters occupied government buildings. The rest of the city went on with normal activities.

Suthep declared a partial victory. He urged his supporters to stay and continue the struggle. He gave them the signal that they should honor their elderly king Bhumibol Adulyadej, who would be celebrating his 86th birthday on Thursday. The birthday of the revered monarch is a national holiday in Thailand. Suthep said they would resume the fight after the birthday celebrations were over.

On Thursday, the monarch appeared briefly in his wheelchair in his palace and read slowly from a piece of paper: “Our country has been peaceful for a long time because we are united in our country and perform duties for the sake of the national interest,” he said.

This past weekend, all members of the opposition Democrat Party in parliament resigned in support of the protesters. In response, Ms. Yingluck on Monday called for elections. Realizing that they will lose again at the polls, protest leaders approached the military about the possibility of another coup to restore them to power. But army General Prayuth Chanocha has so far demurred, reportedly replying, “we must be patient and seek a peaceful solution.”

It appears as if the military officers, as well as the Prime Minister, are attempting to follow the Rural Thai values of peaceful accommodation to opponents.