A Paliyan woman was assaulted in broad daylight at a public bus stop in Tamil Nadu recently, prompting a series of three articles last week in the Times of India. The reporter focused the articles on changes in Paliyan society and the abusive attitudes toward the Paliyans held by some Tamils that have developed as a result. 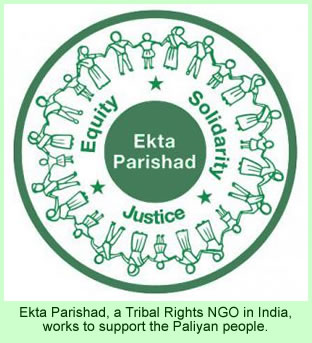 The first article, published early last week, described the assault on R. Malliga, a middle-aged Paliyan woman, which occurred in the town of Periyakulam. The reporter learned that the attack was an attempt to force Ms. Malliga to pay a debt her family allegedly owes to upper caste Hindus in the district for a lease on some land. Malliga responded that she and her family did not receive any cash loans, and that they had been trapped into the debt by Hindus who were exploiting them for their labor.

The reporter contacted S. Thanaraj, an activist with the tribal rights group Ekta Parishad, a well-known Indian NGO that organized a major march on New Delhi 18 months ago. That effort prominently included Paliyan participants and was reported by news stories on October 11 and October 18, 2012.

Thanaraj told the TOI reporter that the Paliyans used to forage nomadically for forest products such as honey and medicinal plants, avoiding contacts as much as possible with the majority Tamil people of the plains. The Paliyans normally did not carry identity cards. But then they began such agricultural pursuits as cultivating lemon, coffee, and silk cotton on lands that they leased from the Tamils. They would have to sell their produce to their landlords to settle their debts.

The Paliyans did not understand the relationships of money to the value of land and the produce that they harvested, so they were subject to exploitation by their landlords, who would fix the prices for the leases and the harvests. The Paliyans would often end their leases having earned nothing and still owing the Hindus money on their accounts. Then, they might be tortured if they couldn’t pay their debts, or forced into bonded labor until they could.

The article contends that there are hundreds of Paliyan families scattered in rural communities to the west of the major south Indian city of Madurai who are being exploited by the Hindus for their labor in this fashion. Ms. Malliga worked for a week with the police to prepare a case against the upper caste Hindus under the provisions of the scheduled castes/scheduled tribes laws of India.

When she succeeded, some upper caste Hindus brought a counter suit against the Paliyans. However, according, to R. Sethu, the deputy superintendent of police in Theni District of Tamil Nadu, where Periyakulam is located, that complaint by the Tamils appears to be invalid.

On April 5, another Times of India report by the same journalist, V. Devanathan, indicated that politicians never visit the Paliyan villages in Theni District as elections approach. The people are unaware of possible candidates or political parties that are contending for their votes, though party workers will arrive on election day and attempt to transport some of the tribal people to local polling places.

K. Ramar, a patriarch in one village, said that most Paliyans have yet to register in the electoral list, in part because they are illiterate. Ramar said that they were ignorant about the candidates and the elections, and most of them did not really know even their correct ages.

K. Lakshmi Ammal, a resident of another village the reporter visited, said the same things—that they don’t get very involved in elections. “Many of us do not have electoral cards. Politicians would not turn up at our settlement on voting day. Politicians had promised us several things, but they have not fulfilled them,” she said.

The third Times of India article by the same journalist provided further information about the villages visited, particularly their obvious poverty. The people do without basic amenities such as electricity, safe housing, sanitation, and clean drinking water. S. Thanaraj told the journalist that while the state of Karnataka provides tribal people with adequate nutritional foods, Tamil Nadu only gives out basic rations.

K. Ramar, the Paliyan patriarch, told the writer that the Paliyans (or Paliyar as they are also called) “do not know about government schemes or benefits. Old age pensions to nine old people were stopped abruptly. Petitions filed to various government officials on their behalf by our sympathisers were neglected. The old don’t even get two … meals [per day]. The lands allotted to the tribals are encroached by upper castes.”