According to Gorer’s book Himalayan Village, effective speech is highly prized by the Lepcha people, and storytelling is among their most valued skills. Gorer explains that “story-telling is the major Lepcha art and distraction (p.265).” Stories told around the fire in the evenings are sometimes of such length that they may take numerous days to complete. Stories are also told during tedious work activities: someone will tell one while everyone is weeding a crop. 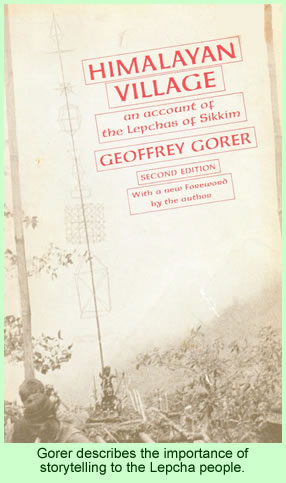 Stories may be told on formal occasions, such as at weddings or feasts, or one may begin spontaneously when an uncommon insect or bird is seen. The sight of the animal will prompt someone to tell the story associated with that particular critter. Gorer describes the Lepcha stories as quite vivid, since they employ precise, concrete visual images. He provides, in the appendices to the book, some examples of the stories.

An NGO based in Darjeeling and Bangalore, India, Acoustic Traditional, is going into this subject in much greater depth than Gorer did. It is recording the stories and folklore of the Lepchas and their neighboring societies in order to preserve their oral traditions before they go extinct. Acoustic Traditional was founded by Kwoico Salil Mukhia, a young man from the Koinch indigenous community. He started his professional career as a music teacher but he developed an interest in storytelling, and from there he took up the preservation of oral traditions.

According to a recent article in the Himalayan Times, a news service from Nepal, Mukhia has documented 800 stories from 12 different communities in South Asia, including the Nilgiri in southern India and the Manipur in the eastern part of the country. His group has been including popular and rare stories, as well as folklore since it began work 15 years ago.

Since 2006, the group has concentrated its efforts on the Eastern Himalayan region of India, especially Sikkim and the bordering region of West Bengal state. In addition to the Lepcha oral tradition, it has documented the stories of Mr. Mukhia’s Koinch people, plus the Bhutia, Tamang, Limbu, and Raj societies.

Mukhia pointed out to the news service that 70 percent of the oral traditions of these societies has already gone extinct. “These are the stories that we don’t get to hear,” he said. “Most of them are rare stories. If not documented, there is a high chance that they won’t be published and heard anywhere in the world because there is no one to narrate those stories.”

He indicated that the stories may range from a few minutes long to ones that can take all night to tell. They are usually narrated by shamans or medicine men and women, but some are also told by elders. He said that the stories are “good to hear.”

He recorded Tsangdup Taso, a Lepcha Bungthing, the last surviving shaman of the Lepcha people, who died not long after sharing a story. His story telling session with Acoustic Traditional was 48 minutes long. The news report does not mention the fact that Mr. Taso died of a heart attack during the massive Sikkim earthquake of September 2011.

Speaking about the deceased shaman, Mukhia told the Himalayan Times, “There is no way to go back to know about his family. Nothing is left. Hence, these stories are important pieces of world history. They should not be forgotten just because they are a tribe. They are a culture and intangible heritage.” The story his group recorded involved a family conserving the worship of Mt. Kanchenjunga, an 800-year old tradition.

The stories recorded by Acoustic Traditional are translated into English and printed by hand on Nepali paper exactly as they are told in an attempt to lose as little as possible in the translation. Mukhia says that understanding the stories is an excellent way to preserve the cultural tradition of the community.

But Mukia goes beyond just recording and translating stories told by the elders and shamans. While he used to focus solely on the stories themselves, he told the reporter, “now I’m being able to see their spiritual and scientific philosophy and their cultural legacy.”

The stories have become, for him, “science, ethno-medicine and ethno-botany.” He says the stories foster an awareness of the similarities among the different societies he records. While they have their disparities, they all worship nature, for example.

Acoustic Traditional is presenting a storytelling experience in Katmandu for the rest of this month called “Stories on the Verge.” The project began on March 29 and will be held every Saturday in April at the facilities of a Nepalese government agency, the National Foundation for Development of Indigenous Nationalities, Jawalakhel.

The storytelling experience of the rural Himalayan peoples will then travel for three years to other cities in South Asia in order to bring to life this aspect of Himalayan cultures. The Facebook page of Acoustic Traditional provides more information about the group and its activities.