The Times of India reported last week that Ladakh had inspired Sarvesh Shrivastava, a music composer/producer from Mumbai, to produce a new audiovisual mashup called “The Ladakh Project.” He and two others toured the area widely for two weeks in May making music, filming, photographing and recording in deserts, mountains, and next to the famous Pangong Lake on the border with Tibet. 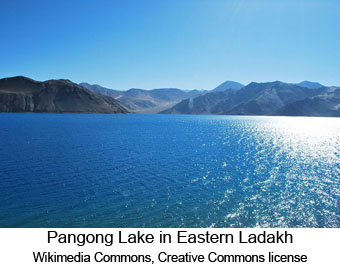 Shrivastava, who uses the stage name SickFlip, had visited Ladakh in 2013 and had been so taken by the people and the landscape that he was determined to go back with some friends from The Outbox Project, a group of visual artists, cinematographers, and photographers whom he has known for many years. The sounds of flowing rivers, monks chanting, and babies babbling are all incorporated into the production. The Ladakh Project consists of a 45 minute visual, a music video, and a 5-track extended play work of music.

Shrivastava was tremendously inspired by the countryside and the people. “The ambiance of Ladakh had a huge impact on my sounds. During the writing process, I would often take inspiration from the massive, serene landscapes around me,” he said. He added that composing his music on his laptop in the midst of such scenery and surroundings was very different from working in his 1,000 square foot studio in the city.

Equipped with extra batteries, a pair of headphones, and a portable keyboard controller, he had the freedom to sit anywhere and let the positive vibes of the environment inspire his compositions. “Everything from my instrumentation and arrangement[s] to mix-downs took off from the environment I was in,” he added. The land inspired him to compose natural sounds that seemed to be more organic than something simply produced from a computer.

He was particularly inspired by a chance visit to a monastery in the Nubra Valley, a remote area in northern Ladakh. His group had missed the morning prayer session but the monks were quite welcoming and curious about everything the team was doing. At their request, Shrivastava explained the music he was making and showed them how he composed on his laptop. He and his team conversed with the monks “about the most unexpected things—the role of the sun, music, creative energies, the Internet these days, and the reach of supplies to small, remote areas in Ladakh.”

The Ladakh Project has received additional press coverage in recent weeks. One source reported the composer as saying, “I was consumed by the thought of capturing [Ladakh’s] beauty and [amalgamating] it with beats and sublime sounds.” He emphasized to that reporter that his normally high-energy beats just wouldn’t work. He had to take the landscape as his reference point, without any regard for what clients, corporations, or others might think.

Fortunately, a three-minute preview of the work is available on YouTube. It includes very rapidly sequenced shots of cute kids, monks conversing, desert scenery, vehicles traveling through glacier-clad mountains, and old buildings. The YouTube preview emphasizes the place of Shrivastava in the production. He is often shown speaking with Buddhist monks, walking in lunar landscapes, and sitting in front of his laptop in a variety of settings—all, of course, in microsecond shots.

Sometimes, the curious viewer might wish the composition would have paused for just a few seconds to let us gaze a bit longer at the gorgeous river, the enticing lakeshore, the magnificent mountains, and the active people. But the whole is nonetheless enticing. The music does not align with the visual imagery—nothing old fashioned like that. Instead, the music takes its own course, seeming to present an impression of Ladakh as a whole, much as the thousands of snippets of scenery seek to create, thorough their sum, a visual sense of the Ladakhi people and their land.

The 21-minute, 5-track EP is also available, without, of course, any of the video artistry—just a composition that features Shrivastava’s musical creativity. While there is a bit of thumping bass in the music, mostly the listener hears a modern interpretation of Ladakhi music and, beyond that, the inspiration of traditional Ladakh.

The EP music is intriguing. It is broken into several distinct segments. For instance, eight minutes into the production, the music dramatically shifts to a presentation of very low-pitched synthetic sounds that imitate the chanting of monks in a monastery. Then, the sounds of the monks chanting are integrated into the soundtrack. Unlike the YouTube preview, which shows many scenes per second, the music proceeds very slowly and deliberately.

The only discordant note to the production is the choice of a title. “The Ladakh Project” has been, for decades, the name that Helena Norberg-Hodge has used for her outreach work in fostering the local experiences and abilities of Ladakhis—encouraging them to cherish and maintain their own ways of doing things. The website for what is now called Local Futures: International Society for Ecology and Culture explains the wonderful work that has developed out of Norberg-Hodge’s pioneering efforts in Ladakh. It’s a shame that several press reports about Shrivastava and his current work do not mention the much older use of the term, “The Ladakh Project.”