Last week, a newspaper in Rochester, New York, reported that some Amish men are helping fight fires with a couple of volunteer fire companies in the Finger Lakes region. The reporter spoke with William Palmer, Sr., at the Croton Engine and Hose Co. No. 1 in the town of Ovid, and with Dale Standard at the Interlaken Volunteer Fire Department in Interlaken. Both towns are between Seneca and Cayuga Lakes, and both fire chiefs had nothing but praise for their Amish volunteers. 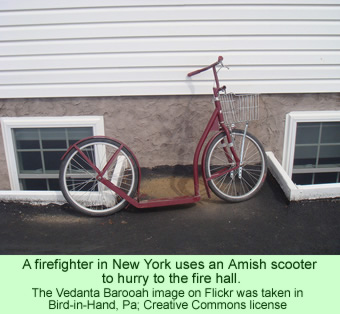 Mr. Palmer said about the Amish, “They are truly a blessing to us in Ovid…. [They] are here, always available in an emergency, and we’re not sure how we ever got along without them.” He said that his fire company has some difficulty retaining its members because of the time commitment that volunteering as a firefighter represents. Those small towns do not have paid, professional fire crews.

He told the newspaper that there are 10 Amish firefighters out of a total crew of 57. Palmer, who has been with the fire company for over 50 years, said that a long time ago they had an Amish member but the local bishop intervened and he quit. However, a few years ago, things changed and another Amish man joined the company. Now, an Amish man volunteers on an average of every couple months.

“One man told me, he’d always wanted to be a firefighter,” Palmer said. “Just like me growing up, so it is something many of us have in common. And the Amish are keenly aware of the need for fire protection. They are all very intent and focused on the training.”

Mr. Standard, the Fire Chief from Interlaken, Mr. Palmer, and others indicated that the Amish are among the best workers in the two companies. “Nobody knows how to roll out a hose like the Amish,” Standard said. “Even at rapid speed, they are meticulous about it.” The Amish firefighters in the two companies range from 19 to 30 years old.

The Amish members did not wish to be interviewed by the reporter, much less to have their names used, but the two fire chiefs praised the working partnership that has developed between the Amish and the English communities. Recently, an Amish firefighter rode on a fire truck in the nearby town of Trumansburg’s Fireman’s Parade; also, an Amish family attended the annual fire company banquet, and some Amish people participated in a September 11th memorial ceremony.

Standard and Palmer both said that they take special care to respect the beliefs of their Amish members. “We’re a brotherhood at the fire house; a second family,” Standard said, adding, “we never want to do anything that is going to offend them.”

The young Amish firefighters carry pagers that they can recharge with solar panels. They are transported to the firehouses by “English” members, or by a Mennonite person. One young man uses an Amish scooter to rush to the firehouse. He keeps trying to improve his time—he can now make it from his farm to the village firehouse in six and a half minutes.

The Amish in the fire companies ride in the backs of the fire trucks and leave the driving up to the English members. According to Standard, the air masks of air packs will not seat securely enough over the faces of men with facial hair, so only men without beards—Amish men who are young and unmarried—are allowed to use the air packs and enter burning buildings.

The fire companies do not have enough funds to purchase the fire equipment they need for all the volunteers, so some of the Amish are eagerly waiting to be assigned air packs and to receive training in their use. According to Standard, the Amish are “fearless.” He added, “perhaps it’s the way they are raised, perhaps it’s their faith. Either way, we’re lucky to have them.”

Palmer commented that the two fire companies are not unique in having Amish volunteer fire fighters. He said that numerous communities in Lancaster County, Pennsylvania, have Amish members participating in their fire companies. He singled out those in Bird-in-Hand, which has 50 percent Amish members, and Gordonville nearby, which is close to 100 percent Amish.