Coyote wanted to eat Opossum but the latter, too wily for his would-be consumer, said he must first eat the juiciest fruits from a nearby cactus. Coyote did as Opossum instructed—he opened his mouth and closed his eyes, whereupon, the possum pitched three prickly pears down the coyote’s throat. 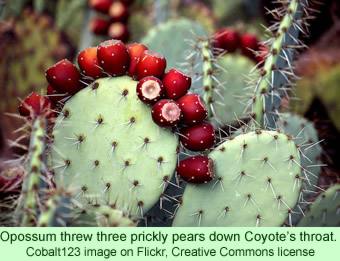 The myth, according to Elizabeth Falconi, restates a moral value to the storyteller’s audience of Zapotec listeners: that ingenuity can triumph over power and force. And that simple moral, she argues, can serve as a metonym for the history of Zapotec culture and language, which are struggling to survive in the face of the overwhelming, oppressive force of Spanish. Furthermore, Opossum’s escape symbolizes the attempts by some Zapotec scholars to revitalize their language, and with it, their cultural traditions.

Falconi’s recent anthropology journal article provides insights into the ways the Spanish and the Zapotec languages are used for telling stories among Zapotec people in the village of San Juan Guelavía, located near the city of Oaxaca in southern Mexico. She sees the uses of languages during their storytelling sessions as part of a process of preserving and revitalizing cultural identity and practices.

By way of background, Falconi writes that the village is composed of people who speak Spanish, one or more dialects of Zapotec, and English, all with greater or lesser fluency. In their ordinary conversations, villagers usually speak a mixture of legitimate Zapotec and Spanish, called zapoteco revuelto.

Almost surprisingly, when the male elders sit down with younger people to tell stories, the men will shift into correct Spanish for their narratives. Other adults present may urge them, especially in the presence of a note-taking North American anthropologist, to use proper Zapotec, called didxzac, which they could also speak.

In contrast to ritualized events such as weddings and the festivals of patron saints, when the people use proper Zapotec as a ceremonial language, during the more informal storytelling sessions the elders often switch nervously back and forth between Spanish and Zapotec. Falconi describes several instances when storytellers she observed were translating their Zapotec stories into Spanish, not only for the benefit of a visiting scholar, who was still learning her Zapotec, but also to help the younger members of their audiences who had limited fluency in the native tongue. The Spanish language had become a dominant idiom for the performance of stories.

Falconi adds interesting asides to her analysis—in story form, of course. She tells how the storytellers she witnessed would relate tales of young princesses who were taken far from their homes and their families, thereby making obvious parallels with her own situation. One man, she writes, “then jokingly suggested that I could excuse my long absence [from home] by pretending I had escaped from a coyote, or human trafficker…. (p.628).”

The author discusses the relationship of storytelling in San Juan Guelavía to the social structures in the village. One of the storytellers she observed, Isidro, was celebrating his 78th birthday. The anthropologist was videotaping the party in order to share it with family members in Los Angles when a call came through from that very family. Isidro said he was telling a story he’d told before to the family gathered around him.

Isidro’s comments showed that he was well aware of his role as the center of the family, and the importance of the ceremonial occasion that was focusing on himself as the primary force in maintaining family social ties. The story he told celebrated his role as “venerated patriarch of the family (p.630),” Falconi writes. Isidro emphasized the importance of his storytelling, the celebration during the evening, spending time together (conviviendo), and respect (respeto) within the family.

Wilber, Isidro’s grandson who was in his late 20s and mostly a Spanish speaker, then expressed to everyone else present the value of his grandfather’s message. He thanked his elder for everything he had done as “the head of this family (p.630),” the source of his understanding and knowledge about the world.

But not all Guelavíans prefer to use Spanish in their oral communications with young people. Falconi describes a program developed by a Zapotec scholar in the village, Javier Ortega, who was at the time the president of the municipality. Ortega’s program sought to revive the use of didxzac by the younger generation.

An anthropologist himself, Ortega sought to restore familiarity and comfortable use of the Zapotec language by having young people translate myths from Spanish into Zapotec, then perform them in a theatrical fashion for the community. The telling of stories was, for him, a way of reclaiming the community’s indigenous heritage. Ortega felt that didxzac was founded on ancient Zapotec, and it had fewer borrowings from Spanish than the Zapoteco revuelto that many people spoke.

His approach reverses traditional Zapotec practice. While storytelling is normally the domain of elders, in Ortega’s program the youth are telling the tales, thus innovating a new pattern yet at the same time reclaiming their ancient culture and language. The new approach benefits the community due to the ways the stories reveal the workings of Zapotec indigenous knowledge. This is the most important aspect of the process: the development of cultural self-esteem, he maintains.

In essence, Ortega’s approach and Isidro’s vary considerably from each other. The one emphasizes the importance of the hidden Zapotec values, while the other clings to the Spanish dominance of their culture. The story of the opossum and the fox was told by the youth of the community in a pilot version of Ortega’s language revitalization program, and was translated by the young people themselves.

Falconi concludes her analysis—much of which has to be omitted in a brief review such as this—by explaining how the collection of such stories by young people forms a “grand historical epic.” She writes (p.632) that “youth reading and translating these tales will be led through a series of increasingly complex Zapotec lessons about the mundane and sacred meanings contained within the myths.”