The G/wi, and the other San peoples of Botswana, continue to be deprived of their rights, despite persistent campaigns on their behalf by Survival International, a London-based NGO. Two weeks ago, an article in the Botswana Gazette, a major news source in that nation, described an important study done by SI that provides details of over 200 cases of human rights violations perpetrated by the government against the minority indigenous people over the past several decades. 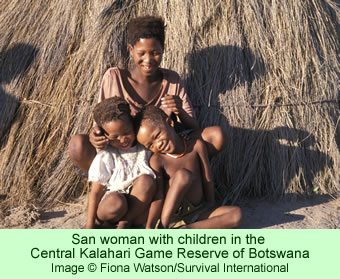 The major issue for the San is that the government has decreed that they are no longer permitted to hunt. Trophy hunters from other countries who pay very high fees are allowed to enter the Central Kalahari Game Reserve to hunt, but the indigenous people who have hunted there sustainably for millennia are not. Botswana’s President Ian Khama imposed the complete ban on hunting on the grounds that it was better for the conservation of wildlife.

The Gwi who live in the New Xade “eviction camp,” as the reporter creatively terms their resettlement community outside the CKGR, were honored with a visit from President Khama on September 27. The San people greeted him holding placards stating “Hunters not poachers,” and “Bushmen are the best conservationists.”

In response to government anti-hunting pressure, Jumanda Gakelebone, a prominent San leader, told one news source, “We are not going to move from our ancestral land and will hunt the wild animals, as it is our way of living. The government will have to put us all in prison.”

The report from SI details over 200 allegations of abuse and torture by Botswana government agents perpetrated against the G/wi and the other San peoples, who have fought several court battles to regain the rights to live on their land and to have access to drinking water. These incidents allegedly took place between 1992 and 2014.

The allegations, if true, are grim. One man was supposedly buried alive after he killed an antelope. Another man refused to allow police to enter his hut without a proper warrant, so they shot his child in the stomach. Government agents arrested three children for allegedly possessing meat from antelopes—though they were later released without being charged.

Some of the allegations are fairly detailed. Members of a paramilitary unit of the police called the Special Support Group (SSG), plus a park guard, abducted two men, Mogolodi Moeti and Maikgantsho Kaingota in New Xade one night. The beat Moeti with the butt of a gun and raided his house searching for illegal bush meat. They found nothing but drove off with him, later returning him without making any charges.

Another report was even grimmer. On November 28, 2012, SSG agents accused Nkemetseng Motsoko of poaching game, so they pushed his head into an animal hole until he lost consciousness. After he came to, they suffocated him again in another attempt to make him confess where he had hidden the meat. He had the medical records to show that he had been taken to a hospital and had received injuries to his jaw and his teeth.

The SI report describes abuses over the course of many years. In 2005, the government deprived the G/wi residents in the CKGR of access to water. Xoroxloo Duxee died of dehydration after refusing to leave.

Rachel Stenham, an official with Survival International, commented in an interview that the tribal peoples of the Kalahari will do the best job of guarding and conserving the natural world in the CKGR. She said that Gem Diamonds, which has just opened a new mine in the reserve, had promised to also open new bore holes in the CKGR for the San, but so far it has not done so. As a result, it has become very difficult for the people to survive there. Ms. Stenham decried the continuing attempts by the government to force the people out of their traditional homelands.

Last week, SI continued to put pressure on Botswana to allow justice for the minority peoples by protesting the tourism industry in that nation. On November 5, protesters handed out SI leaflets to people visiting the World Travel Market in London, a leading international travel industry event. The Botswana Tourism Organisation was hosting a stall at the event all week. The leaflets urged people to boycott travel to Botswana as long as it prevents starving people from hunting on their land.

The SI news release that described the latest action quoted President Khama as expressing his disdain for the G/wi. He evidently said that they live “a very extinct…very backward form of life,” adding that they were responsible for “severe loss of wildlife” in the CKGR. SI claims that studies show the contrary—that hunting by the San tends, in some cases, to increase the numbers of at least some antelope species.

The Survival International release quotes a most effective statement by Stephen Corry, director of SI, which summarizes the situation: “Tribal peoples are portrayed as backward and primitive simply because their communal ways are different. It’s a way of justifying the theft of their land and resources in the name of ‘progress’ and ‘civilization’.”