In December 2006 the government of India passed landmark legislation that recognized the rights of traditional societies to continue to subsist in the forests. The Scheduled Tribes and Other Traditional Forest Dwellers (Recognition of Forest Rights) Act, usually referred to simply as the Forest Rights Act of 2006, came into effect on January 1, 2008. 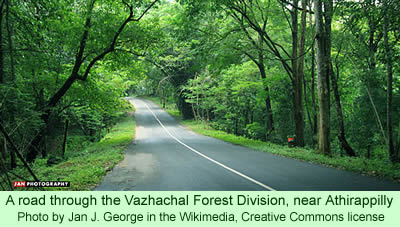 A news story posted on the website of WWF-India last week describes how that NGO has been working since 2007 with the Kadar and with the Vazhachal Forest Davison (VFD) in India’s Kerala state to help the tribal people protect their forests and their rights to traditional Non-Timber Forest Products (NTFP).

The unsigned news story eloquently describes the fact that the mountainous region in which the Kadar live includes “some of the country’s most beautiful landscapes filled with waterfalls and deciduous as well as evergreen forests, which are home to hornbills, elephants and over 200 animal species.” The Vazhachal Forest Division helps protect both the Parambikulam and the Annamalai Tiger Reserves.

Roughly 850 Kadar live in colonies within the VFD, into which they were resettled some 50 years ago. WWF-India argues that, since the Kadar still depend on forest resources for many of their needs, conservation work is essential for their own livelihoods as well as for the health of the ecosystem.

The news release indicates that the Kadar have never been agriculturalists. They depend on Non-Timber Forest Resources such as bees wax, honey, tubers, and fish from the rivers for their subsistence. A recent journal article discussed the importance of the NTFPs for the Kadar. They are, themselves, aware of the dangers of overuse of the resources, and are eager to learn how to better preserve them for their future generations. Furthermore, the Kadar are interested in learning to use technologies that will help them preserve the forest environment.

Because the Kadar are highly knowledgeable about the native flora, especially the uses of medicinal plant species, outsiders realized that they could effectively monitor the health of forest plants. Their expertise could lead to better understanding of the impacts of NTFP harvesting on the long-term protection of the forests.

In the beginning, WWF-India conducted data collection activities with the Kadar to investigate their dependency on forest resources. The NGO also wanted to determine the socio-economic status of the nine Kadar communities in the VFD. WWF conducted meetings in the tribal settlements to share information about the best, most sustainable, ways to use forest resources, as well as strategies for preserving the ecological integrity of the region.

Then, WWF initiated a process of community mobilization that encouraged the Kadar to map the forest resources. As a follow up, administrators overlaid the maps to identify collection and depletion areas. That process promoted inter-community dialogs, so the tribal peoples themselves could decide on ways to correctly harvest resources that would give them maximum long-term sustainability.

The WWF held what the news story refers to as “capacity-building workshops,” programs which sought, over the course of a year, to train 30 Kadar from the nine different colonies to do ecological monitoring. WWF also worked with the VFD in the use of modern technologies such as GPS equipment so forest officials and the Kadar could work together on appropriate conservation programs.

In 2012, all nine Kadar settlements filed claims for their Community Forest Rights, as provided for by the Forest Rights Act of 2006, a story which an earlier news report covered. All were subsequently approved by a district level committee. The titles for these forest rights were finally signed in January 2014 and distributed the next month, on February 26, to the Kadar communities by the Kerala Tribal Minister.

These new Community Forest Rights Kadar groups are, with the help of WFF-India, setting up coordinating mechanisms to ensure that the forest resources will continue to be monitored and used sustainably in the future.