India has three national holidays, one of which, Republic Day, is celebrated every year to mark the date on which the national constitution came into effect, January 26, 1950. The primary focus of the nation’s annual celebration is a Republic Day parade, held along a major avenue in New Delhi. 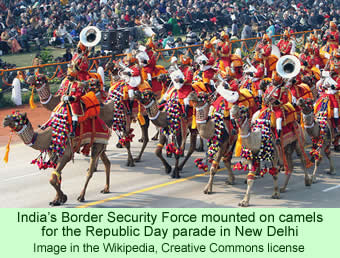 The Prime Minister lays a floral wreath at a monument to India’s unknown soldiers, military units march past the dais where all the dignitaries sit, and a variety of floats go past, prepared at considerable expense and trouble by selected states and union territories around the nation. The festive air of the grand parade is augmented by presentations of the social and economic activities of the vast country. For instance, the Border Security Force, with its camel-mounted band and troops, are a regular highlight of the event.

Each year a different chief of state is invited to be present as Chief Guest, and this year for the first time, on Monday last week, a U.S. President, Barrack Obama, was on the viewing stand with India’s Prime Minister, Narendra Modi. Despite the rain and drizzle that day, the camel corps was resplendent in its gay, floral decorations. President and Mrs. Obama, other members of the U.S. delegation, and many Indian dignitaries enjoyed the floats which were paying tribute to the different cultures and traditions of India.

According to one news report, Sikkim was invited this year to participate, and the state chose to base its presentation primarily on cardamom production, especially by the Lepchas. The theme chosen by the state for its float was “Cultivation of Large Cardamom in Sikkim.”

The tableaux on the float portrayed the cultivation of a cardamom field, with a traditional Lepcha house in the background. It also portrayed the drying of the cardamom so it would be ready to market. In the foreground, a statue of a Lepcha lady showed her carrying a basket with a ripe cardamom in it.

The Nepalese and Bhutia communities in Sikkim also cultivate cardamom, so ten living representatives of all three groups were included on the float, each dressed in their native costumes. In addition, 34 Lepcha dancers, both men and women, performed traditional dances on the float for the crowds, the television networks, and the dignitaries on the main platform.

According to a recent study by Kumar et al. (2015), cardamom has, for many years, been the most important cash crop of the Lepchas, though they also grow rice, millet, maize, buckwheat, wheat, vegetables, and pulses. Around their homes they grow sugarcane, yams, sweet potatoes, garlic, cucumbers, beans, chilies, and ginger. Lepcha farmers also raise livestock.

But in recent years, the authors write, the cultivation of cardamom has been declining and the production of ginger, another spice, has been taking its place. Nevertheless, “both the crops play a vital role in the state economy in terms of direct and indirect employment and income generation (p.37).” The research project by Kumar et al. consisted of surveying 100 farmers in five villages in the Dzongu Region to determine the extent of their knowledge of farming techniques and the constraints on their crop production of cardamom and ginger, such as insect and disease dangers, problems with seeds, and the like.