A reporter for the Hindustan Times recently decided to visit the village of Turtuk, a Balti community in the Shyok Valley of Ladakh near the border with Pakistan. While his report is basically a travel piece, it presents some interesting information about this seldom visited region. Furquan Ameen Siddiqui, the reporter, had been a tourist in Turtuk during a bike trip down the Shyok River in August 2014, but he had only stayed a day in the village. He wanted to go back for a longer visit so he chose this recent winter for his second trip. 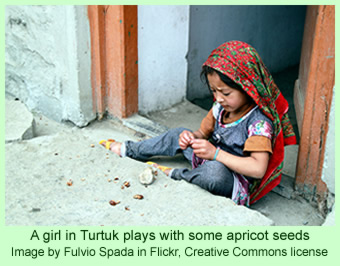 Turtuk has become well known, according to the writer, for its walnuts, tomatoes, and especially its apricots. It has developed a cooperative venture where bottled apricot juice is prepared for sale in Leh, the capital of Ladakh. Other agricultural ventures in the fertile valley are raising buckwheat and barley.

Siddiqui writes that the Shyok Valley, in that area near the border, is lush and green in summer. Local farmers are seen carrying large bundles of barley on their backs or putting apricots out to dry on their roofs. But conditions were very different during his recent winter visit. Nothing was growing—everyone was depending on their stored food supplies.

Baltistan, a small part of which is in Ladakh, is clearly different from the rest of the Leh District. The Buddhist monasteries are left behind as the traveler drives northwest down the Shyok River valley and crosses into territory populated primarily by Muslims. Turtuk and the other communities near the border with Pakistan are inhabited by Noorbakshias, followers of Sufi Islam, plus some Sunnis and Shias. One of the mosques, in the hamlet of Youl, part of Turtuk, dates back at least to 1690.

That sliver of Ladakh was seized by the Indian Army during a war with Pakistan in 1971. The 500 families in the village of Turtuk, who live only six miles from the new border with Pakistan, had to adapt to life under the control of the Indian Army rather than, until then, the army of Pakistan.

The history is that the Indian army launched an offensive on December 13, 1971, which moved the border 25 km northwest in the Turtuk sector. Many nearby villagers fled down river to Khaplu and Skardu, towns farther into the Pakistan section of Baltistan. The people of Turtuk decided to stay.

The reporter asked them why. Abdul Karim, an elder in the village who cares for the mosque, replied that that was where they had lived for ages. Their country had changed, but they had remained the same. Before, they had obeyed the army of Pakistan, but now, the army of India.

Village elders for decades after 1971 prevented young men from joining the police or army for fear of what might happen to them should Pakistan seize the area again. The reporter said that he spoke with villagers about the effects of the 1971 partition. People told him of parents being separated from their children, siblings from each other, even wives from husbands. To this day, crossing the border six miles away to visit close relatives is not permitted unless the villager travels hundreds of miles to an approved border crossing.

Turtuk was closed to outside tourists until late in 2010, and the nearby hamlets are still closed. This year has been the first time that tourists, such as the author, have been able to visit during the winter.

Some writers, such as Harvey (1983), have ascribed the famed peacefulness of the Ladakhi to their Buddhist beliefs, but Pirie (2007) has argued persuasively that nonviolence in the local mountain communities is based more on social and cultural conditions, such as commitments to avoiding anger and settling conflicts quickly, than on religious beliefs. Unfortunately, the article last week on the Balti living in a sliver of Ladakh did not explore those issues in that particular community.