Semai names for places near their communities suggest their uses of the forests, their historical recollections, their spiritual values, and their commitments to maintaining a nonviolent society. Karen Heikkilä untangles these issues with a fascinating study of Semai toponymy, their understandings of place names, in a recent journal article. 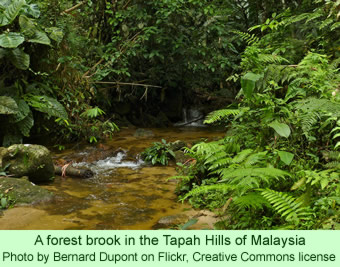 Heikkilä’s work provides a way of viewing the Semai approaches to natural phenomena and their sense of their place in the world, at least insofar as these elements are encoded in their language. In essence, their place names, or toponyms, offer insights into their worldview and the importance of the forest within it.

The author studied three Semai communities in Malaysia’s Perak state: Kampung Batu Empat Belas, Kampung Pos Woh, and Kampung Ampang Woh, all located immediately to the west of the Central Main Range of the peninsula. Her major interest is in the relationships of the people in each of the villages with the natural, forested environs of the Bukit Tapah Forest Reserve, also called the Tapah Hills, east of the nearby town of Tapah. It is a broken, hilly area with sloping foothills, ridges, and streams flowing out of the higher mountains immediately to the east.

She provides some useful background. The surrounding forests are essential for the sustenance of the Semai in these three villages, as witnessed by the construction of their houses, the nature of their tools and implements, and the ways their foot trails wind in and out to nearby streams, orchards and swidden gardening patches. Despite the fact that they live surrounded by, and to some extent integrated into, Malay culture—their children go to schools and many of them work for wages in Tapah—they still utilize the landscape for their sustenance and identify themselves as Semai in most senses.

In the interviews the author conducted for her research project, she learned that forest stewardship is essential to the Semai. They revere the land not only because of the forest itself, but also because their ancestors lived there and thrived on its bounties. They also hope that Semai in the future will continue to subsist there.

They preserve their memory as a society due to their interactions with the forest. They view the primary forest as being far more important than just the source of their daily needs. It is a place that has never been cut, where trees were planted by their ancestors, and as such it must not be used for farming or logging.

Despite those values, the Semai in the three communities have no legal titles to the lands they have customarily used and lived upon—they have no guarantee of their land tenure. Their rights to fish, farm, trap, and collect in the forests are protected by Malaysian law, but land takeovers by public agencies or private corporations are still possible.

For her research, the author recorded about 400 toponyms used by Semai in the three villages. She noted the names of the places, their etymologies, and the folklore and land uses connected with those toponyms. She interviewed village elders and a variety of other Semai individuals. She primarily focuses in her report on the meanings of the place names and what those names may suggest about the relationships of the people with the land.

Heikkilä describes numerous names that fall within several categories. For instance, an extremely important category are toponyms that refer to vegetation, especially trees, which are often prominent landmarks. Several place names refer to durians, a prized tree species that produces a treasured fruit. Those trees often serve as boundary markers that demarcate individual or family orchards. Durians can be long-lived trees, the longevity of which suggests that the ancestors seeded them. They signify permanence to the Semai.

Toponyms also record the presence of birds, insects, and mammals such as tigers and they serve to remind the Semai of the history of the 19th century violent slave raids. The toponyms graphically capture the violence of those times, when Malay slavers entered Semai villages to steal people, and they suggest the importance of never forgetting this history. While mainstream histories of Malaysia may lack information about the slaving, the individual communities studied by the author remember—helped by their toponyms.

The Semai give names to places associated with people, though sometimes they signify unpleasant associations. A ridge is known by the name of a girl who died violently, an individual that might not have died but for the negligence of her father, who did not return from a trip when he said he would. Semai feelings of helplessness in the face of an unpredictable world may foster this practice of naming places, which helps them remember violence in their past. In addition to instances of negligence, the toponyms based on violence record attacks by tigers and the history of slave raiding.

The author believes that the process of remembering violence, through the naming, may help deter aggressive behaviors. Memories suggest to the Semai the importance of personal restraint, responsibility to others, and sharing, all attributes that “are crucial to uniting a group in the face of the vagaries of the forest environment and the world at large (p.373).”

Heikkilä writes that while working for wages takes many adults out of the villages, away from the forest environment, they still seem to remember the names of the places in the vicinity of their homes. Younger Semai may know the names but they may not be as adept at recalling them in detail. Fewer young people are as directly engaged in subsistence work in the forests as their elders are, so they are not learning and remembering the toponyms as well.

One Semai research participant told the author, “Semai place-names must be conserved so that Semai history will never be forgotten. The names should also be preserved because they have been passed down through the ages by word of mouth and have always been used, always been present in the Semai language (p.375).”

Heikkilä hopes her study of Semai place-names, and the narratives they represent, will help them gain recognition for their rights and ownership over the lands they have traditionally used. She also hopes that the Semai themselves will intensify their mapping of their landscape, including ancestral toponyms that indicate its ecological, economic, spiritual, and historical importance to the people. Such maps could serve to help protect the forest by including Semai perspectives on land use planning and management practices.

Heikkilä, Karen. 2014. “‘The Forest Is Our Inheritance’: An Introduction to Semai Orang Asli Place‐Naming and Belonging in the Bukit Tapah Forest Reserve.” Singapore Journal of Tropical Geography, 35(3), November: 362-381