The Nunavimmiut, Inuit from the northern third of Quebec called Nunavik, are a strongly united and determined people, according to a report from Nunatsiaq News last week. The news service reported that the Makivik Corporation, the governing body of the Nunavimmiut people, had just adopted a forward-looking declaration at their annual general meeting in Kuujjuaq. The Makivik Corporation declared that they are determined to protect and promote the Inuit culture and language and to strive toward greater autonomy. 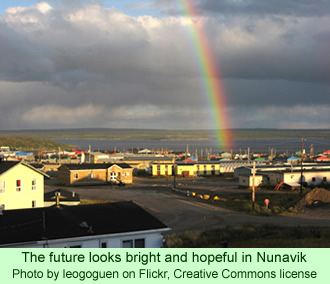 Jobie Tukkiapik, the President of Makivik Corporation, said, “with the adoption of this Declaration, we have clearly stated our commitment to protect our culture and language, improve our socio-economic situation and work towards a new governance structure.” Fortunately, the text of the declaration is available as a PDF on the Makivik Corporation website.

The powerfully-written declaration states many obvious truths, ones that need repetition: that the Inuit people of Nunavik have lived there for thousands of years, and that they have “suffered from the grip of colonialism,” but that they must reassert their pride, their strengths, and their commitment to protecting their “unique Inuit culture, language and identity.”

The declaration indicates that its statements are founded on earlier reports and documents. It insists that Nunavimmiut relations with industrial developers and government bodies must be focused on improving the quality of life of the people of Nunavik, and they should be based on a pervading sense of mutual respect and equality.

Many of the specific issues the document addresses are of current economic importance. The high cost of living and the poverty of many families are concerns that need immediate attention. The people need safe, adequate, affordable housing. Health and social services need to be strengthened.

The document addresses some fundamental social concerns of the Nunavimmiut, not just in terms of what governments must do for them, but in terms of what they, the Nunavimmiut, must do for themselves. For instance, one paragraph of the document states, “We must recapture our core family values and traditions. Ilagiit means being part of a family and this concept defines us. We need to clearly state these values and traditions, and apply them in our homes and communities.”

The declaration advocates investing in education for the Nunavimmiut. It recognizes the need for community groups to work together better in order to improve social services and justice systems, so that communities will be able to ameliorate pervasive social problems.

The Makivik Corporation advocates regional approaches to planning which will better develop tourism, mining, and public sector jobs. It recognizes the need to provide electrical power, develop new forms of energy production, and harvest wildlife in a sustainable fashion. It argues for real, but sustainable, development in Nunavik.

According to the news report in Nunatsiaq News, Geoff Kelley, the Aboriginal Affairs Minister for Quebec, attended the March 27th Annual General Meeting of the Makivik Corporation in Kuujjuaq. However, the news service reports that the government of the province has not, as yet, responded to an earlier discussion from the same group, called the Parnasimautik Consultations of 2013, or the resulting Parnasimautik Consultation Report dated November 14, 2014.