Royal /Ui/o/oo, the only Ju/hoan person to be elected to the Parliament of Namibia, has been appointed to a position as deputy minister in the office of the Vice President. However, his detractors are unhappy with the appointment. 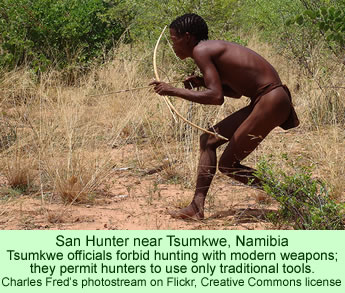 According to an article last week in The New Era, a major newspaper in Namibia, critics claim he is unsuitable for the office and incompetent. Ju/’hoansi supporters of the newly appointed official reply angrily that the critics have a hidden agenda, which is to try and continue oppressing the San people, a marginalized society in the southern African nation.

His supporters assert that even some of the ministers appointed by the President have shortcomings, but they are not criticized in the same biased ways as Mr. /Ui/o/oo’s appointment has been. They ask why he is being singled out and criticized for his imperfections, when the others are not.

The Ju/’hoansi supporters add, “it would be better if people could wait and stop their criticism with his current position because he has authority in terms of decision making, implementation, monitoring and evaluating marginalised people’s affairs unlike the previous post he held.”

A detractor evidently commented that there is a hidden agenda in appointing members of disadvantaged groups like the Ju/’hoansi into high government positions, and “in the long run we are doing ourselves grave disservice.” Mr. /Ui/o/oo’s supporters responded that this kind of appointment is not intended to prove to the world that the government of Namibia is necessarily always perfect, but it does demonstrate that disadvantaged groups like the Ju/’hoansi are, in fact, participating in the agendas of the nation.

Another news source, One Africa Television, a TV station in Namibia, carried a three minute segment about the appointment of Mr. /Ui/o/oo. The station published its “News on One” segment to YouTube on March 26. Entitled “Deputy Minister Royal /Ui/o/oo on Representing Minorities in the Vice Presidency Office,” the news segment includes video scenes of San people living their daily village lives, as well as of Mr. /Ui/o/oo speaking into a microphone.

The narrator introduces the news segment by telling viewers that the constitution of Namibia forbids discrimination of ethnic minority groups. However, she admits, the rights of indigenous people such as the San are not always recognized.

Mr. /Ui/o/oo then appears and reminds viewers that they have a saying, “one Namibia, one nation,” but he makes it clear that reality does not always live up to that promise. He appreciates the president appointing him to the new position, he says, and he reminds viewers that he is a San person himself, so he really does understand minority issues better than others might.

He tells Namibian viewers that there are many issues about which he is concerned relating to minority peoples in the nation, among which are hiring more indigenous applicants into government positions. He also wants to work with appropriate agencies to make sure the San people are able to participate in popular sporting activities, the same as other Namibians do.

He suggests, however, that it is essential to sit down with the elders in the indigenous communities to solicit their opinions about suggested changes. Officials need to balance planned developments with established ways of doing things. If you just focus on development projects without paying attention to traditional cultures, he concludes, “at the end of the day you might lose out.”