A Peace Corps volunteer, who only identifies herself as “Dr. Rosemary,” has just visited Ifaluk Island, an experience that she briefly describes in a blog entry posted on June 2, 2015. She includes many pictures with her blog posts about her year in the Yap State of Micronesia, which began in August 2014. Her visit to Ifaluk was part of a trip beginning on May 13 to the Outer Islands of Yap state. 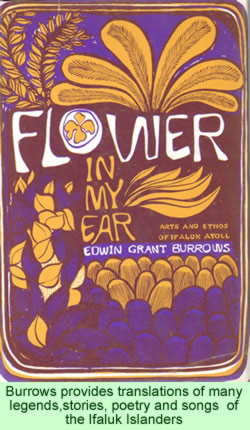 Dr. Rosemary spent much of her day on Ifaluk examining women who had female concerns. After she taught the woman health assistant on the island how to do a clinical breast exam, they then examined about 30 women who came to them in the course of a long day.

Fortunately, she had some time to tour the island, guided by a young girl who went with her to the elementary school and through the village. It was a very hot, humid, tropical day. One of the highlights of her visit occurred when Joe, a Health Assistant from Lamotrek, another nearby island, suggested that she might want to walk to the men’s house and “pay homage to the chief.”

It was clearly intended as a joke on her, since she evidently already knew that the central support pole of the men’s house is decorated, from top to bottom, with a carved turtle, a lizard, and an erect human phallus. Dr. Rosemary asked the chief if she would be allowed to take a picture of the post, which he agreed to (see her photo no. 10 of the 13 she posted with that day’s blog entry).

Others had told her that if she did get to visit the chief and she did take a picture of the totem pole, it would bring her bad luck, or at least it would represent a serious cultural breach. Dr. Rosemary writes that since it was OK with the chief, she felt it would be fine for her to take the picture.

It is not clear from her blog entry if she was aware of the myth surrounding the wooden phallus and the fact that the erect penis on the Ifaluk men’s house is a symbol of peacefulness on the island. Burrows (1952) provides the story quite succinctly (p.19-20) while Burrows book Flower in My Ear (1963), p.71-77, gives more details.

Legends on Ifaluk tell of violent periods in the distant, mythic, warrior past. In one of the major myths, a chief had visited a nearby island, Woleai, where he had married a woman and had a child. But he had been beaten there and nearly killed because of a quarrel. He managed to survive, escaped back to Ifaluk, and called a general meeting of all the men on his island.

He gave a brief speech and dropped his loincloth with the statement that if his penis pointed toward the other island, they should go to war and kill everyone there except his spouse and child, whom he had specially marked with distinctive wristbands.

When his erection did, in fact, point toward Woleai, the Ifaluk men went to war and killed everyone on that island as the chief had directed. In 1947, when Burrows visited, the front post of the men’s house on Ifaluk had an 18-inch wooden phallus mounted on a supporting beam. It pointed, of course, straight at Woleai. The phallus is clearly still there in 2015.

But there is a significant difference between the founding mythology of the Ifaluk and that of many other societies. The Ifaluk Islanders decided to get over their violent past. One of Burrows’ informants, named Tom, made it clear to the visiting scholar that the events described in the story had occurred long ago. “‘Before, before,’ he said, raising head and eyes as if to point to a very distant past. ‘Not now. Now all same one people.’” (Burrows 1963, p.77)

Tom was emphasizing the fact that the Ifaluk were very different—they didn’t fight any longer. The Ifaluk have their faults, as all people do: their island is not a utopia. They have a male-dominated society that would repel many outsiders. But it is not a violent place—they absolutely reject violence.

Thus, the difference between Ifaluk and many larger societies and nation states is not so much that the one is a small, isolated island and the others are larger and more cosmopolitan. The difference is that the one distances itself from its past, treats violence as something that people simply don’t do any longer. Its stories serve as reminders of the way people were in ancient times. People such as the Ifaluk no longer believe in violence.

On the other hand, many societies and states glorify their long-ago warfare and keep their myths current as part of the fabric of contemporary life. They continually try to reinvent themselves in the images of their glorious, violent, and storied past experiences. The Ifaluk provide an example of a society that has a different vision of itself. It has changed, and it cherishes the peacefulness of its contemporary life.

Other than the erect penis, the rest of Dr. Rosemary’s description of the post at the front of the men’s house differs in every detail from the one that Burrows saw when he first visited the island in 1947. The penis then was about 5 feet above the ground, but above it were various paintings in black of a lizard, a shark, and a man rising, centaur-like, out of the shark. It appears as if the Ifaluk have been willing to change the nature of their icons, except for the phallus, which has too much importance to change.

Whether Dr. Rosemary saw the exact same post, or a new one, is not clear—and probably it does not matter. The importance is that the graphic symbol of the way the Ifaluk used to be is preserved and cherished on their island, since it serves not only as a reminder of the way they were but also the way they want to be.