The Zapotec in the mountain village of San Jose del Pacifico, in southern Oaxaca, resent the fact that their local hallucinogenic mushrooms are attracting backpackers who are coming just for the drug experiences. Navarro Namur, a healer, expressed his resentment strongly: “The local people here have thousands of years of history tied to these sacred plants. We welcome tourists to experience the full panorama of our culture, but we don’t accept backpackers coming here and selling the drugs just so they can get high.” 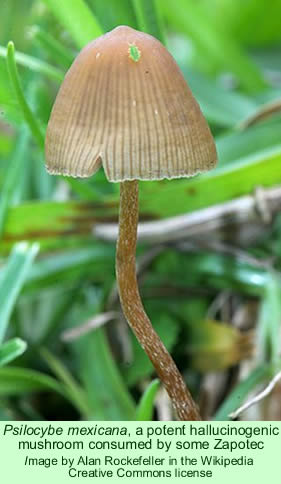 The mushroom species featured last week in a piece published by the MailOnline, from Britain’s Daily Mail newspaper, is Psilocybe mexicana. It has played an important role in the local Zapotec culture for a long time; its usage by tourists has been more recent, but growing rapidly.

Guzmán (2008) provides an effective overview of the history and uses of the hallucinogenic mushrooms of Mexico. He concludes that the sacred mushrooms of that nation belong “almost exclusively to the genus Psilocybe (p.410).” Some of the Psilocybes were used for ceremonial purposes before the Spanish conquest, but Catholic Church authorities persecuted the users and tried to force them to substitute approved church rituals for pagan ones. To this day, however, usage has persisted in some of the more remote indigenous communities in the highlands of the country.

While the Psilocybe mushrooms do grow worldwide, the reporter for the Daily Mail, Alasdair Baverstock, focused specifically on the mexicana species and its uses by the Zapotec. His article covered the local controversy about the uses of the drug by the international backpackers, and the way merchants are selling to them. One backpacker told the journalist that the mushrooms were the strongest she had ever taken, and that she ended up “hugging trees and screaming at the sky.”

But the real interest in the piece is the insight it provides into the uses that the Zapotec themselves have for the mushrooms. One is that families feed them to their young children when they are less than five years old as a rite of passage that celebrates their childhood: the fact that they have survived infancy and are now being welcomed into the community. The family will go out into the forest with the child and they will all consume the fungi together.

One man, Margarito Mendoza, remembers his childhood indoctrination. He told the reporter how scared he was of the visions he had, since he had no idea why he was having them. Along with his family, he heard the trees talking to him and the wind flowing through his eyes “like a rainbow river.” He now runs a hostel where he helps backpackers have their own trips.

Alejandro Garces, a boy of three, will be taken by his parents to the hills outside town next year so that they can, together, consume the mushrooms. As the hallucinogenic effects take hold, they’ll chant thanks to the gods for the latest member of their community, the little boy. The mother told the reporter that she didn’t feel that the experience would be at all dangerous. She regularly consumes the mushrooms herself.

Eusebia Huajanab, a local healer, told the reporter that “the mushrooms are good for the soul.” She administers the ceremony in her own sauna, called a temazcal, in which a tea is poured over hot stones to purify the people inside. The steam bath and the herbs she puts into the preparations help open the mind for the voyage on which the mushrooms will be taking the consumers, she says.

The mushrooms are either consumed fresh, or in a tea after being boiled, or they are preserved in honey. Consuming the mushrooms is normally illegal in Mexico, but traditional uses by the Zapotec are still permitted under Mexican law.

The journalist concludes by quoting Ms. Huajanab, who expresses her disgust about the changes that the drug-seeking backpackers have brought to San Jose del Pacifico. “The town used to be a happy community where people would share their belongings,” she told the reporter. But it has now become a place where the drug traffic predominates. She wonders aloud how long their ancient culture will be able to survive.