The Batek are highly dependent on the diverse life forms that surround them, especially the forest plants that they use for medicinal purposes, and as a result they have accumulated a vast knowledge of local natural resources. Amran Alias and Hood Salleh argued in a journal article published last December that the Orang Asli (original people) of Malaysia, particularly the Batek, represent an excellent source of information about indigenous knowledge on this topic.

The authors identified several issues relating to the study of Orang Asli uses of plants. The most obvious one was to question whether traditional knowledge of medicinal plants is still important among them. How are they actually being used? Furthermore, how would the possible benefits from the commercial sale of plant resources and plant knowledge be shared in the community?

Simply put, the goal of their research was to find information that would describe the ways an Orang Asli community—in this case the Batek of Kuala Koh, in Peninsular Malaysia—handles their traditional knowledge of medicinal plants. The authors carried out their investigation from April to June of 2014 by conducting in-depth interviews with leading individuals in the Batek community and by doing some participant observations.

They decided to study the Batek of Kuala Koh because it is located right next to the world famous Taman Negara National Park. The people there have the advantage, compared to many other Orang Asli communities, of having fairly close access to a richly varied tropical forest.

Despite the fact that developments are taking place in the region surrounding Kuala Koh, the authors found that at least some members of the Batek community still retain a good knowledge of their traditional medicines. Furthermore, many believe that plant preparations are more effective than modern medicines in curing illnesses.

Batin Hamdan, the 56-year old headman of the community, told the authors that when someone becomes ill, family members normally seek the advice of others and try to find the recommended medicinal plants to cure the illness. However, if this approach fails to cure the sickness, they will call on Pak Abu, a 55-year old man who is the most skillful healer in the community. He learned his knowledge about using forest plants from his father, who learned from his ancestors before him. Pak Abu might prescribe the consumption of various parts of plants, and he might also perform appropriate rituals to assist in the cure.

Hamdan shared his own experiences with the authors. He explained that when his daughter had a stomach illness, he took her to a modern hospital for treatment—“but she died due to modern medicine (p.280).” Had he anticipated that tragedy, he would have cured her himself, he said. As a result, he no longer believes in using the modern health system.

The authors found that many people in Kuala Koh prefer to rely, for healing, on their traditional uses of plants rather than on modern medicines. Many Batek are still engaged in hunting and gathering in the forests, so they are frequently, if not constantly, exposed to the medicinal plants. 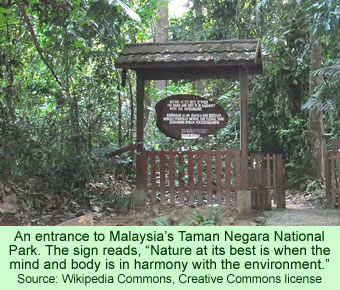 Allias and Salleh participated in one hunting and gathering expedition into the forest; within 500 meters of entering the woods, they noticed the presence along the trail of five different plants that members of the community had shown them earlier, plants which had properties useful for curing fevers, diarrhea, headaches, and cancers.

However, the authors did learn that the traditional knowledge of medicinal plants has been declining among the Batek. In some cases, the plants themselves have become scarce in the surrounding area—difficult to obtain despite the fact that the national park is completely protected.

The knowledge of medicinal uses of forest plants is typically transferred orally from elders to younger people. Although many Batek possess some familiarity with medicinal plants, more detailed knowledge tends to be retained by fewer people: experts such as Pak Abu. The knowledge is then transmitted to younger family members of the expert.

However, this transfer of the plant knowledge from older to younger people requires that the latter be already reasonably familiar with the forest. But that process has become a challenge for the Batek. In order for younger people to be familiar with some of the plants, they would have to walk considerable distances into Taman Negara. In earlier times, when the Orang Asli commonly lived surrounded by forests, plant resources were easily available close to their homes. In recent years, the forests have increasingly been cleared around their communities.

The authors argued that it is important for the Batek to identify who actually owns the medicinal knowledge of the forest plants. If monetary benefits were to become available to the community from the development of possible medicinal uses of plants—for instance, from the patenting of a new drug by an international pharmaceutical firm based on a local plant—who would actually own that knowledge and benefit from the sale? A good answer was not provided.

Alias and Salleh observed that the younger members of the Batek community are becoming less and less attached to the traditional hunting and gathering lifestyle. They are no longer much interested in going into the forest and searching for medicinal plants and foods. Yon, who is 24, told them that “many of them (the younger generation) prefer to just hang around and [do] nothing (p.282).”

Alias, Amran and Hood Salleh. 2014. “The Challenges of Managing Traditional Knowledge Related to Medicinal Plants among the Batek Community in Kuala Koh, Gua Musang, Kelantan, Malaysia.” Journal of Social and Development Sciences 5(4): 275-283. Available free of charge as a PDF on the Internet.