Last week, Eric Michael Johnson described the way the Mbuti censured the abhorrent behavior of Cephu, a story told originally by Colin Turnbull in The Forest People, one of the classics of modern anthropology. Johnson’s piece, originally published in Slate in October 2012 and republished last week, retold the well-known Cephu story and cited it as part of a broader argument. 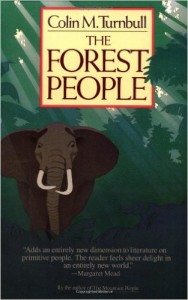 Turnbull told the story dramatically. Cephu was the head of four or five Mbuti families, a group that was not large enough to successfully form their own net-hunting band. He usually had a stand-offish attitude toward the two larger groups that formed the main band, refusing to make contributions to the Molimo festival or to take part in it, though he did participate in the daily net hunts—enough at least to get a share of the game for his group.

One day his behavior was particularly antagonistic toward everyone. During the hunt, he committed the crime of setting up his own net inside the circle of the other nets, intending to catch an animal first and not share it with the rest. The hunters all returned to camp in a fury since Cephu’s deception had been detected.

One of the men loudly summoned everyone together and, in turn, the people began openly insulting Cephu for his past behaviors; several people even refused to give him a place to sit. After he had been seated, others in turn denounced his behaviors, especially his egregious crime that day. It was pointed out that everyone had helped him when his own daughter had died, but he was not responding to the Molimo festival now, which resulted in the death of an elderly, respected lady.

Turnbull (1990) explains that for the Mbuti, the Molimo festival is a way of contacting the spirits through song. They sing their songs to symbolize their exclusion of the rest of the world except for the forest that surrounds their camp—the forest of sounds, movements and smells that form the essence of their lives and rituals.

Anyway, Cephu answered that the old lady who had died was not his mother, unwittingly announcing that he was therefore not related to the rest of the camp. He was then told that he could go off with his own group and be a chief like the Bantu villagers if he wanted. Cephu’s bluster was broken. He apologized profusely, gave lame excuses that no one believed, and indicated he would give everyone else the meat he had taken.

The others quickly swarmed through the huts in his area of the camp and took all the meat, some of which his family had quickly tried to hide. The band members continued their taunting into the evening. Cephu cried out that he and his family were hungry, but everyone taunted him. However, after dark, someone took a pot of food in his direction. Later, Cephu joined the main group around the fire singing the Molimo festival songs along with the rest of the men. The good spirits of the entire camp had been restored. 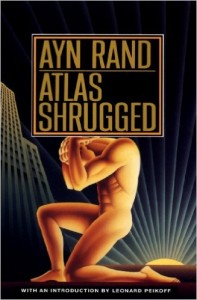 The same year that Turnbull was doing his anthropology field work in the Ituri Forest of the Congo, 1957, Ayn Rand published her dystopian novel Atlas Shrugged. The hero of her story, John Galt, condemned all collectivist societies since they don’t support individual rights. Galt stated, as quoted by Johnson, “By the grace of reality and the nature of life, man—every man—is an end in himself.” Galt continued, “He exists for his own sake, and the achievement of his own happiness is his highest moral purpose.”

Johnson argues that Rand’s reasoning is diametrically opposed to that of the Mbuti. Her Galt wants to live his life focused entirely on self-interest, which nature requires of him. Human nature is, in essence, based on rational thinking, individual achievement, and self-interest; and capitalism is its natural expression. Paul Ryan, now the Speaker of the U.S. House of Representatives, has cited Atlas Shrugged as a major influence on his worldview. Galt would view the approach of the Mbuti, in Johnson’s words, as “the disease of altruistic morality and economic redistribution.”

Johnson goes on to cite a work by anthropologist Christopher Boehm, who has been studying altruism in human societies for over 40 years. He discusses Boehm’s recent work in some detail, examining his study of the literature on 150 hunter-gatherer societies that he refers to as “Late Pleistocene Appropriate” peoples. He finds that they directly contradict the selfish ideal of Ayn Rand.

While none of those societies are perfect or completely without conflicts and occasional violence, in 100 percent of Boehn’s sample, altruism and generosity predominate toward both relatives and non-relatives alike. Cooperation and sharing are the most highly cited moral values. Boehm cites a variety of other factors involved, such as the roles of gossip, public opinion, spatial distancing, and expulsion in helping to preserve the moral rules in those 150 societies.

Johnson summarizes his comparison of the Mbuti with the modern capitalistic society. Ayn Rand might have felt a bond with Cephu, he suggests—they both valued themselves over the broader group and attempted to maximize their personal profits. But Turnbull made it clear that the Mbuti tried to minimize their disappointments with Cephu’s behavior by normally keeping their thoughts about him to themselves. It took his major crime that one day to bring matters to a head. But as the story concluded, group rules prevailed, and the uneasy balance between group needs and individual desires was maintained peacefully.