An increasing number of G/wi and G//ana residents of New Xade, a resettlement community in western Botswana, say they want to return to their former homes in the Kalahari Desert. Jumanda Gakelebone, a prominent advocate for the rights of the long-suffering San people and now the councilor for  New Xade, which is in the Gantsi District of west central Botswana, told the Sunday Standard Reporter last week that he keeps hearing the discontents of his constituents.

Gakelebone told the paper, “They were saying that when they were relocated from the [Central Kalahari Game Reserve] to New Xade, the government promise[d] to eradicate their poverty and make them rich. However, they are complaining that instead of those riches they are now getting infected with AIDS. They want to escape the certain death that will come with this AIDS by going back to the CKGR.”

The Sunday Standard continued by summarizing the recent history of the two groups of people. The paper wrote that 1740 G/wi and G//ana were forcibly removed from their homes in the CKGR by the government in 1997 and a second group of 530 people left in 2002 when the government cut off all essential services.

A court ruling in 2006 allowed them to return but without compelling the government to provide services such as water. In 2015, after years of pressure by the London-based human rights group Survival International and a local group, First People of the Kalahari, the government finally gave in and agreed to begin restoring essential services to communities in the CKGR.

Mr. Gakelebone told the paper his constituents are telling him that the only reason they had not returned after the 2006 court ruling was the absence of essential services. Now that those services have been restored, they are considering getting out of New Xade. The reason is their disenchantment with life in the resettlement community. The spread of AIDS is particularly frightening to them.

For AIDS used to be just a term to them, “a name for something we didn’t know.” But during the time the people were being moved to New Xade, a lot of construction work was going on in the community. New Xade has a particularly large and plush health clinic, for instance. Mr. Gakelebone singled out the presence of the outside construction workers who built such facilities for introducing AIDS into the San communities. It is now a severe problem in the town.

The councilor also singled out the widespread abuse of alcohol as a significant problem. He admitted that the San drank some alcohol in past decades when they lived in the CKGR, but it was only available when it was brought in by visitors. As a result, it was not abused. But in New Xade there are countless shebeens, illegal neighborhood bars, and the ingredients for brewing their own traditional beverages are easily available. The Sunday Standard report concluded that the San people are now also suffering from high blood pressure and diabetes, the result of a sedentary lifestyle in the town and the consumption of processed foods. 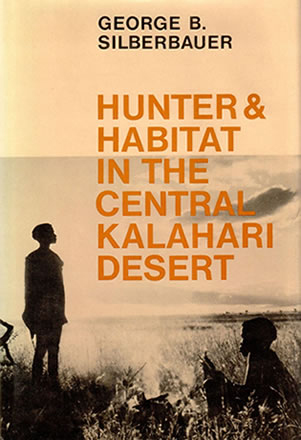 Neither Mr. Gakelebone nor the reporter appeared to consider the possibility that the discontent among the G/wi with the generally unsavory conditions in New Xade may be exacerbated by the fact that this is the worst time of year in the Kalahari for human communities. George Silberbauer’s fine book Hunter & Habitat in the Central Kalahari Desert (1981), which predated the problems caused by the forced resettlements, discussed the problems the G/wi had with the season they called !hosa. It is the hot and dry season between the end of winter in August/September and the beginning of the rains in late November. The season was defined by the climatic conditions rather than by the calendar.

As Silberbauer wrote (p.105), “Because of the heat and the scarcity of food, !hosa is the most difficult [season] to bear. People become morose, depressed, and listless, and it is the time of disease, discomfort, and disinterest.” The author went on to say that the problems were aggravated by the fact that band members usually had dispersed into their “separation mode” during this time of the year. He continued for a number of additional paragraphs discussing the stresses of the dry season in the Central Kalahari.

Consulting Silberbauer allows one to wonder if, despite the availability of food and water in New Xade, the problems of the resettlement community that Gakelebone discussed might be particularly upsetting to the residents during this season, !hosa. Perhaps November and the cultural memories of desert hardships prompt a time of discontent that aggravates the very real social problems.