On August 23, the French daily newspaper La Croix published an article about the San people who are still able to eke out a living in the Central Kalahari Game Reserve (CKGR) of Botswana. The article does not identify whether the reporter is interviewing G/wi or G//ana individuals.

Motswakgakala Gaoberekurep, squatting in his small, round traditional hut, tells the journalist about the old ways. He talks about his victories over lions that have threatened him and his family in the evenings, illustrating his points by drawing letters in the sand. He and his wife live part of the year in Metsiamanong, one of the few original San villages that the Botswana government has permitted to remain in the CKGR.

While he speaks with the reporter, his wife cleans their breakfast dishes by dipping her sponge into the ashes of their fire and using it to rub the cups clean. She then hangs them on tree branches to dry. 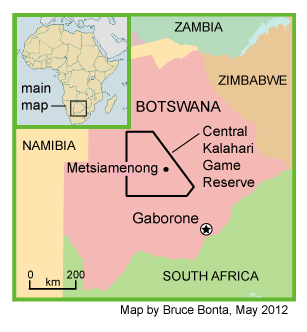 The news article detours to provide a bit of history of the CKGR: how it was established by the British colonial authorities in 1961 to protect the native fauna—leopards, hyenas, mongooses, and antelopes. But then the government of Botswana decided in 1997 and again in 2002 to expel the various San tribes in an effort, it claimed, to protect the native fauna. Supposedly, the government also wanted to modernize the living conditions of their San citizens. The Botswana High Court ruled in 2006 that expelling the San from the CKGR had been illegal.

La Croix skips over some of the details, only briefly describing a ruling in 2014 by the government that hunting was banned throughout the country, a move that was calculated to hurt the San with their hunting traditions. Some of them had started caring for livestock but after the 2006 court ruling, the families that had won the right to return to their villages were not permitted to have livestock.

For the San living in the CKGR communities as well as for those who struggle to get by in the resettlement camps outside it, idleness often seems to be the most popular pastime. One person remembers in the old days not only not having any money but not even knowing what it was. Another comments about not having much to do to occupy the time. Food rations are distributed every month by the government. The San who live in the resettlement camps in particular have serious problems with alcoholism and depression.

Some of the San do keep busy digging up tubers of the devil’s claw plants, drying them in the sun, and selling them into the health food market. Other San are hired by luxury lodges in the CKGR to work as gardeners or as guides to demonstrate to tourists their traditional ways.

Onthusitse Tshotlego has done that sort of work in the lodges and he dreams of opening his own lodge someday. The thirty-something man takes care of about 40 family goats in Gugamma, another small San village that the government permits in the CKGR. But his real love is for the wild animals, ostriches and elands in particular.

He brags to La Croix how his ancestors used the leg bones of ostriches to make tools and the empty shells of their eggs as containers. The earlier people used the fat from around the eland’s hearts; mixed with roots that were crushed, it was made into a lotion. He credits the use of the animal parts as an important factor in allowing people to live in the desert.

Onthusitse says he does not miss electricity; he was born without it. Some of the young San people do, however, dream of having more urban amenities, such as electric lights in the evenings. The journalist, noting the brilliance of the southern stars above, seems inclined to agree with Onthusitse.