News articles from India four months ago made it sound as if the opponents of a proposed dam on Kerala’s Chalakudy River, which would destroy a Kadar village, may have been hopelessly defeated. But reports since early April have indicated that the opposition is alive, well, and still vigorously protesting. The dam construction has yet to begin. The Kadar village threatened by the proposed dam is apparently still in place. 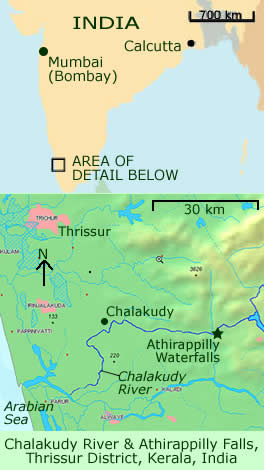 For those needing a full background on the proposed dam, Indiatogether.org provided a thorough review on April 9. That story includes a photo of the Athirappilly waterfall when the flow is severely reduced due to the water storage practices of dams further up the river. Another photo shows the famed falls during high monsoon flow.

While the 144 km Chalakudy River already has six dams, the Kerala State Electricity Board is preparing to construct a seventh on a spot that will severely disrupt the flow of water over the falls and impact a large tract of forest land at the edge of the mountains. The local opponents are not about to give up the fight. A mother of three, named Ammini, who leads the opposition, contends that they have a good chance of winning. Hundreds of families are sustained by the income from the million or so tourists who come each year to see the waterfalls, she argues.

Opponents point out the inefficiencies and waste of the planned project, but much of their emphasis is on the threats to the hornbills, elephants, and fish species that will be affected. The April 9 article questions the wisdom of trying to relocate the Kadar village out of the way of the hydropower project.

An article in The Hindu on April 16 described a meeting in Chalakudy in mid-April held to commemorate the 61st day of the satyagraha action by local people protesting the dam. The lead speaker at that occasion, Medha Patkar, a prominent Indian environmental leader, was outspoken in her criticism of the dam proposal.

“When the government thought about building another [dam], they should have discussed the matter first with the Kadar tribe. The project should be implemented only if the grama sabha [a village meeting] of the Kadar tribe approves of it. Environmental impact assessment and public hearing held for the Athirappilly project were an eyewash,” she argued.

In mid-May, the Chalakudy River Protection Forum and the Athirappilly Action Council, the two organizations taking the lead in opposing the dam proposal, began to announce a larger convention in Chalakudy for June 3 and 4, the 100th day of the satyagraha action that began on February 25. The purposes of the convention, called “Jalaaravam” (call of water), were to coordinate the work of a variety of grass roots groups, to demand that the Kerala state government prepare a “white paper” justifying the project, and to demand a “river basin dialogue” at all levels.

Several news stories after the event, however, focused on the comments of the keynote speaker, famed author and social commentator Arundhati Roy. She said that the people should develop a militant, though nonviolent, strategy for preventing the government from building the dam. “If the foundation for the dam has been laid, throw it away,” she said.

She argued that the project is environmentally unsustainable, economically foolish, and politically unwise. Government agencies usually try to outwait opponents of projects such as these, so her response is that people involved with the struggle should continue until the government ultimately gives up. “Maintain your energy level,” she urged.

Some news reports mentioned the comments of other speakers at the convention: writer Sukuman Azhikode, environmentalist M. K. Prasad, and Dr. Sudhirendar Sharma. Dr. Sharma said, in part, “Athirappilly is the microcosm of what a growing economy has on offer! Undoubtedly, it is a reflection of an unholy trinity of bad policy, inept governance and dumbing down of public mindscape. No wonder, the thundering noise of growth subsumes the feeble tweak of a hornbill.”

A few weeks after the convention, the Chalakudy River Protection Forum decided to proceed a bit more aggressively with its satyagraha action, though still nonviolently. The group announced it would form a youth brigade to help save the river and the waterfall.

On July 1, the Kerala state electricity minister indicated that hearings related to the dam project would be completed in July. Perhaps of more significance, the state Forest Department two weeks later, on July 14, expressed its continuing opposition to the dam. As early as 1991, when the electricity board first proposed the project, the Conservator of the Central Forest Zone at the time, T. M. Manoharan, expressed opposition to the idea since it would adversely affect not only the waterfalls but also the wildlife, biodiversity, and tourism in the region. While the electricity board maintains that the project would not affect the wildlife or biodiversity of the area, the Forest Department continues to refute their arguments.