Many music critics claim that Led Zeppelin’s 1971 “Stairway to Heaven” was one of the greatest rock songs of all time. The lyrics, written by the band’s vocalist, Roger Plant, were apparently inspired by his readings in Lewis Spence’s Magic Arts in Celtic Britain and not by the Lepcha myth with the same title.

A stairway, or a tower, to heaven may be a familiar theme—Jacob’s Ladder or the Tower of Babel in Genesis—but the government of Sikkim, in India, wants to use it to promote tourism in the western part of the state. The village of Daramdin is the supposed location where a “stairway to heaven” was built in ancient times. Why not build a reconstructed Stairway to Heaven there again, along with a Lepcha museum. Attract tourists, who will spend their money. 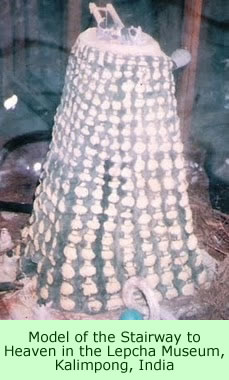 The idea of such a reconstruction floated around for years in Gangtok, the capital of Sikkim. A foundation stone had been laid by the Chief Minister for the state in 1995, but the project got nowhere due to a lack of funds. The estimated cost—Rs 300 crore ($US 63,700,000)—was much too high. In August 2009, the Roads and Bridges minister, R.B. Subba, announced that the proposed project had been revived and approved by the state government at a cost of Rs 3.48 crore ($US 739,000).

The Sikkim Department of Cultural Affairs and Heritage, along with the Building and Housing Department, announced last week that they have adopted the project and commissioned an Indian construction and engineering company to prepare a detailed feasibility report. State officials, members of the Sikkim Lepcha Association, and others were scheduled to visit the site on June 5.

The basis of the project is the Lepcha legend that their ancestors tried to build a stairway to heaven out of pottery. The best scholarly description of the legend is by Nebesky-Wojkowitz (1953), which appeared in the journal Anthropos. The author describes several versions of the legend, a very ancient story about the origins of the Lepcha people. The one accepted by most Lepchas is that the first people lived in the glacial ice on their sacred mountain, Kanchenjunga, the world’s third highest peak, located on the western border of the state with Nepal. The legend bears remarkable similarities to the Tower of Babel story in Genesis.

When the original people descended from Kanchenjunga to the plain of Daramdin, they decided to build a tower to heaven out of pottery. They wanted to grab the sky with a hook and pull it down. They formed themselves into three groups, one to make the pots, another to carry them to the building site, and a third to build the tower itself.

When the builders got right up close to the sky, the ones at the top realized they were quite close to their goal. If only they had a hook, they could pull the sky down. So they called to those below to hand them a forked stick, but the request got confused in transmission, and the people below heard the order to tear down the tower. The folks at the bottom could not believe what they heard, so they asked for clarification. The order was repeated, they thought—tear it all down.

So the people at the bottom, with all their tools at hand, began smashing the foundation layer of pots. Suddenly, the entire tower came crashing down, crushing almost everyone on the ground in the vicinity, plus the workers who had been on the tower. The people who survived the tragedy could no longer communicate with one another. They left, scattered in all directions, all speaking different languages.

Other versions of the legend differed in details, such as which tribal groups were involved, but they told more or less the same story. Nebesky-Wojkowitz discusses the possibility that the pottery fragments found at Daramdin may in fact have been from an ancient tower construction. His conclusion is ambiguous. He points out that other tribes lived in the area and they may, in fact, have been the ones who built the legendary tower. He writes that the plain of Daramdin is now (as of 1953) composed mostly of fertile rice farms, only a small portion of the area is untilled, and pottery shards that are constantly being discovered are probably not funerary in origin.

The local people ascribe them to the legendary tower, and they just pitch them away. He suspects that the plentiful shards started turning up when the area began to be farmed more intensively in the mid-nineteenth century, and that the discovery of the pieces of pottery led to the legend being ascribed to that area. Only an intensive archaeological investigation would allow the question to be settled more definitively, he argued.

Other scholars continue to work on the legend and the possibility that Daramdin is the real locality in western Sikkim where the original Lepchas tried to build their tower. Perhaps the museum and the tourist facility to be erected there will promote further popular interest, and even more scholarship, about the culture of the Lepchas. One can doubt if this new stairway to heaven will ever have the universal reach of the famous song, however.