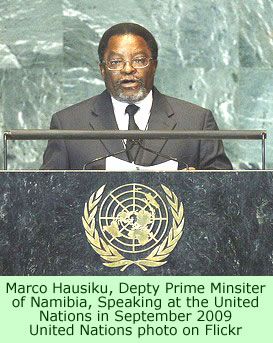 Mr. Coma indicated that the difficulties the Ju/’hoansi are having with the invaders are getting worse every day. There are over 300 outsiders now living in Tsumkwe, and they are causing severe problems due to a lack of enough water and an inadequate sanitation system. They are also engaged in illegal hunting in the reserve. Mr. Coma made a special point of thanking the Deputy Prime Minister for supporting some infrastructure development projects. But some of the improvements will be threatened by the invaders, he maintained.

He also mentioned to the official other problems that are unrelated to the Herero invasion. For one thing, some orphans, disabled people, and elderly individuals lack proper identification papers, so they are unable to qualify for government grants. The people apply for the proper registration papers, but the documents then do not make it out of the Home Affairs office.

The traditional chief of the Ju/’hoansi, Bobo Tsamkxao, also spoke with the distinguished visitor. He complained that the Herero invaders were now threatening to take the law into their own hands and kill some of the indigenous residents of the reserve, which was established by Namibia as a protected area for the Ju/’hoansi to live on and manage.

Mr. Hausiku urged everyone to abide by the laws, and to not move about like animals, invading other people’s lands. He said that Tsumkwe needed to urge the Gam farmers to leave and go back to their homes, where the government had established facilities—a school and a clinic—to help them. “It is a pity that people are not realising that what they did was wrong and what we need to do is to support the Chief to tell them to go back because that is the only sensible thing we can do,” he said.

He went on to emphasize that their invasion last year—cutting the veterinary fence along the conservancy boundary—was completely wrong, especially since it put the nation’s beef industry, and perhaps the entire economy of the country, in jeopardy. He repeated that the invasion was illegal, and everyone needed to obey the laws. The New Era, the Namibian newspaper that carried the story, did not report if he made any definitive statements about actions the government might take to remove the invaders from the community they had moved into—illegally.

The news report did indicate that the Namibian courts have not yet been able to resolve the mess. A court case has been postponed three times. The Herero farmers are demanding that the government give back their cattle, which were condemned due to the fear of their being infected with foot and mouth disease. They also demand compensation for their losses. The Ju/’hoansi are asking for the invaders to be removed. Nothing appears to be happening, other than visits from politicians.