The City Council of Viroqua, Wisconsin—in the news back in May due to citizen anger against droppings from Amish horses—seems to be making progress on the issue. A large crowd, more than 50 people, turned out at a special meeting to discuss with the Council the best ways to deal with the problem. 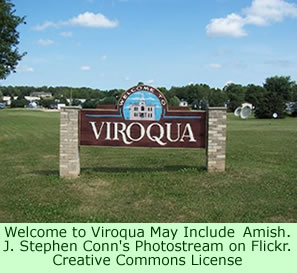 Mayor Larry Fanta opened the meeting by announcing that residents had been complaining about horse manure along the public streets. He wanted to discuss the issues with the Amish people, as well as, obviously, the local residents.

“The city has always had the power to enact something restricting the horses to having a diaper or sling or whatever,” the mayor said, but he didn’t want to approach it that way. He had talked with some members of the Amish community six to eight months earlier but nothing much had changed. Their horses continue to mess up the roads.

Alderman Gary Krause, who had spoken during the May meeting in favor of making further attempts to reach out to the Amish, urged the Council to do something—more effort was needed to address the situation. The horse droppings might endanger someone, he argued. Another alderman, Marc Polsean, said that the Amish buggies should have license plates so the police could track down offending horses and their owners. Others urged the council to require diapers, slings that hang beneath the rears of the horses to catch droppings.

Enos Glick, from Gardner Road in County NN, spoke to the meeting as a representative of the Amish in the area. He indicated that a horse trotting down a road with such a diaper, or sling, might be spooked by the droppings bouncing up and hitting it in the rear from the action of its own trotting. “We don’t like to see spooked horses,” he said. In other words, a safety issue is involved.

The co-owner of Nelson’s Agri-Center in the city, Dan Kanis, spoke up to support Mr. Glick’s contention. He had called city officials in Augusta, Wisconsin, where horses are required to have slings under them. There have been some safety problems there because sometimes the horses have spooked. Another city, Loyal, approached the problem differently. The Amish living near that community indicated they would take their business elsewhere, but instead they reached a compromise with the community. They agreed to drive their buggies on lesser-traveled roads into town, and they attempted to clean up as much as they could. The community agreed to clean up manure that the Amish missed.

Mr. Glick added that it is sometimes hard to clean up when a horse drops its manure. David Treptow, one of the major complainers according to the May story, spoke up in response to Mr. Glick, telling him that cleaning up after his horse was his responsibility. If the drivers of buggies don’t clean up after their animals, how could the community require the owners of dogs to clean up after them when they defecate in people’s yards?

Mr. Kraus said that horse manure can be a safety problem for riders of two-wheeled vehicles such as motorcycles, who have to dodge the piles. They even, at times, would spin out of control in them. However, some people in the crowd spoke in defense of the Amish and their horse transportation. Cars cause more damage to the environment than horses do, they asserted.

In the compromising, submissive spirit of Amish culture, Mr. Glick said that he would be glad to take his business to another community and keep out of the city. “We don’t want to be a problem for you guys,” he said, and added, “we don’t want to be in your way.”

Alderman Krause spoke up at that point. “We’re the last people to want you to go somewhere else,” he said. He added, however, that “the people who are complaining have rights also. What I’d like to see happen is try to clean up after yourselves a little bit.” Krause said that he hoped people who have other suggestions would communicate them to the City Hall, 220 S. Main St., Viroqua, WI, or speak up during regular City Council meetings on the second and last Tuesdays of every month. The Amish, meanwhile, will discuss the issue among themselves and schedule another meeting with the Council to continue working on the problem.