The peaceful Ju/’hoansi, who live in the northeastern Namibian town of Tsumkwe, may be getting closer to a settlement with the Herero who invaded their lands last year, according to a recent news report. The Legal Assistance Centre (LAC), which is representing the San people in their dispute with the invaders, has issued a deadline of August 9 for the 300 Herero farmers to reach an agreement with the Ju/’hoansi traditional chief—and then to move out of the Ju/’hoansi territory and back to Gam where they came from. 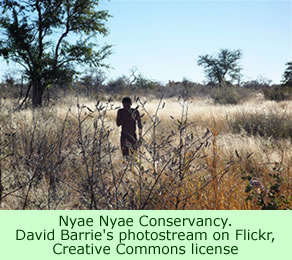 The Herero people, claiming last May that their flocks were threatened by a poisonous weed growing near their community, cut the sanitary fence that surrounds the Nyae Nyae Conservancy, a territory declared by Namibia to be subject to the management and decisions of the traditional Ju/’hoansi chief. The fence was erected by Namibia because the foot and mouth disease may still persist among wild animals in the conservancy.

When Herero invaders cut the veterinary fence and entered with their cattle, starting last May, the government of Namibia hastily rounded up all the animals and quarantined them, since they might have come in contact with infected wildlife. The economy of the nation would suffer if an outbreak of foot and mouth disease occurred in their livestock. The Herero protested, but about 300 of them stayed on in Tsumkwe, in the conservancy, without their cattle. The Ju/’hoansi have since been trying to deal, peacefully, with the invaders in an attempt to persuade them to leave—but so far without success.

Lesle Jansen, a legal consultant for the LAC, has told the Herero settlers that they were violating the laws of the town, which prohibit animal husbandry. Herero donkeys, horses and other domestic animals pose problems for the Ju/’hoansi.

Near the end of June, the invaders and the Ju/’hoan people apparently attended a meeting to discuss the issue. The Herero asked the Ju/’hoansi chief to reconsider and allow the Gam people to stay in their town. Chief Bobo, the traditional ruler of the town, replied that his people “are not happy.” They would not reconsider. He went on to say, “you cut the fence and came into my area. You cut the property of the Government and move[d] in. This will not be accepted or allowed at this stage.” 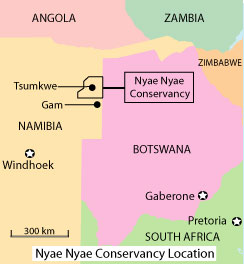 An elderly Herero man reportedly answered, “What will you have us do? Return to Gam to die?” The chief told him that they needed to obey the laws of their country, which do not allow them to move into Tsumkwe like that. “I as a San person respect that law. Why will you not respect that law?” he told him. According to Namibian law—the Traditional Authorities Act 25 of 2000, and the Communal Land Reform Act 5 of 2002—the traditional chief has the sole authority to determine the right to residency in the Nyae Nyae Conservancy.

One conservationist, who is not named in the news account, expressed the opinion that the farmers from Gam “have no respect for the San Traditional Authority” and that the Ju/’hoansi have a “peace-loving community,” which the Gam farmers try to “threaten and intimidate.”

Other observers, cited by the news article but also not named, contend that the Ju/’hoansi have had to live with intimidations, threats, illegal hunting, and even violence at the hands of the invaders, just as a news report in May, on the first anniversary of the invasion, had alleged. The deputy Prime Minister of Namibia visited Tsumkwe in June and suggested that the invaders were overusing the water and sanitation facilities of the community, and he too urged them to return to their homes in the Gam area.

It is hard to be sure, but it appears as if the crisis for the Ju/’hoansi may be moving toward a resolution, though likely a peaceful one if they have their way.