Nearly 50 years ago, Colin Turnbull’s wonderful book The Forest People described the fairly peaceful lives of the Mbuti people in the Ituri Forest of the Democratic Republic of Congo. Unfortunately, their living conditions have declined dramatically in recent years.

IRIN, a humanitarian news service from the United Nations, carried a story last week describing the grim situation in the Mbuti refugee camps in the eastern section of the country. It repeats, and amplifies, a similar report from the UN High Commissioner for Refugees last May. 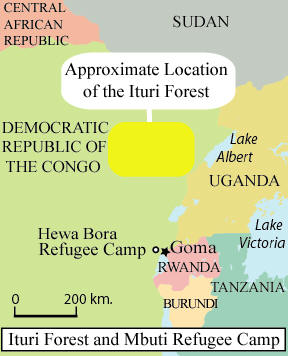 One of the major problems for the Mbuti refugees outside Goma, at the eastern edge of the country, is that much of the land is covered with lava from a volcanic eruption in 2002 and is completely unsuitable for agriculture. Mupepa Muhindo, an Mbuti representative from the refugee camp Hewa Bora who was also quoted in the May report, told IRIN that it was not possible to cultivate the soil.

Muhindo and the other Mbuti fled from their ancestral homes in the Ituri forest in 2004 due to the interminable fighting, which targeted—and still focuses on—the slight, indigenous people often referred to as “Pygmies.” Their lives in the refugee camps are still fraught with discrimination and daily violence. One international expert described the Mbuti of the eastern Congo as one of the most severely impacted of all the world’s displaced peoples.

IRIN queried the UNHCR by email about the situation. The agency replied that it is advocating for the Mbuti, but they are receiving no material assistance from the government of North Kivu province—nothing to help them withstand the rains, nothing to provide them with arable land so they can start to cultivate food. Evidently around 300 Mbuti live at the Hewa Bora camp.

An elderly Mbuti woman, Hodi Nyiramajambere, told IRIN that she had been living in the Virunga National Park, famed for its rare mountain gorillas, but the government evicted her. “The nurses put us out,” she said, and she added that they “don’t give us medicine, because we have no money. Our children and babies are dying.” Their shelters do not have electricity or running water.

The IRIN story describes the way many Congolese people discriminate against the Mbuti. Mark Lattimer, from Minority Rights Group in London, said that officials and people in positions of authority routinely tell them to go away since they are Mbuti. “One of their biggest problems is that they have great difficulty accessing any kind of public or social service, partly because they don’t have the money,” he told IRIN. “They are routinely turned away. Officials or anyone in authority will simply say ‘you’re a Pygmy, go away.’”

The Minority Rights Group visited the Mbuti in 2004 and documented the crimes committed against them in a hard hitting report that year. Lattimer said that the violence against the Mbuti is often attributed to superstitions about their supposed supernatural powers, and the beliefs that men’s problems can be cured by sleeping with Mbuti women. He dismisses these explanations—they are justifications for violence and rape. He argues that the real problem is that they are marginalized by the majority Congolese people, so they can be victimized with impunity. Lattimer suggests that a very important issue for the Mbuti is their lack of land.

Muhindo, the spokesman at Hewa Bora, says that another critical issue is their inability to pay school fees. Since children can’t study, they will have no future. “Because we don’t have any education, we can’t consider ourselves people like others,” he adds.

Michel Nganga Buruki Kisolobo, an Mbuti man, has moved into the city of Goma, the provincial capital, and has been able to support himself as an herbalist and as the operator of an information center for others struggling to adapt to city life. He told IRIN that it is difficult for Mbuti to get jobs, even though many want to find work. They face discrimination everywhere they turn. He also expresses concern that when his people move into the city, they will forget their Mbuti ways. “Our children must know about the animals living in the bush,” he believes.