The news on Tristan da Cunha, a peaceful community of less than 300 people, normally focuses on births, deaths, and weddings—and occasional changes in the local structures of authority. The island, which proudly bills itself as the world’s most isolated inhabited community, has no airport, so the arrival of ships provides special excitement for the inhabitants of the volcanic dot in the middle of the South Atlantic Ocean.

The SA Agulhas, a South African vessel which makes an annual supply trip to Tristan, arrived on September 9th and is expecting to depart for Cape Town on October 2nd. Built by Mitsubishi in 1977, the ship is operated by the Directorate of Antarctica and Islands in South Africa’s Department of Environmental Affairs and Tourism. 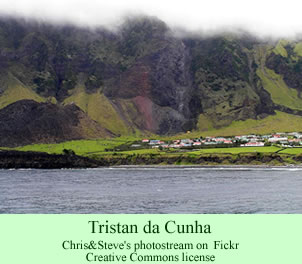 Its annual trip is extremely important for the Tristan Islanders because it allows up to 30 visitors to stay on the island for three to four weeks, before the ship has to leave again. It has a helicopter, so the 30 passengers it carries can go back and forth from the ship to the island, whether the tiny harbor is open or closed. The passengers are relatives of Tristan Islanders who are celebrating the beginning of spring with a visit to the island.

This year, the arrival of the ship has been even more significant because the Island Administrator, David Morley and his wife Jacki are leaving. They have served on Tristan for three years and they are being replaced by a new administrator, Sean Burns, who arrived with his wife Marina. Mr. Burns will overlap with Mr. Morley for the three weeks while the ship is anchored off the island.

Both men are career diplomats. Mr. Burns has served in Tanzania, Antigua, Bangladesh, Senegal, Kenya and South Korea as well as in London. Mrs. Burns has experience as a teacher of English as a foreign language, primarily for the British Council.

The Tristan Times ran a news story last week about the events celebrating the departure of the old Administrator and the arrival of the new one. On Sunday the 19th, the Chief Islander, Ian Lavarello, gave a speech at a reception welcoming the new Administrator. He recalled the financial difficulties that greeted Mr. Morley three years ago, and alluded to the fact that those problems are not yet over. The island has shifted from a subsistence to a cash-based economy, and he expressed pride that everyone was employed.

But he noted that the financial reserves of the island are slim, more so than ever, though he expressed confidence that everyone would work together to find solutions, as they have done with problems in the past. He expected that the Tristan Islanders would continue to retain, as the newspaper expressed it, their “independent life style.”

But the paper could not ignore the really important events of September. During the visit of the ship, the community celebrated its own rites of spring: a wedding, the baptisms of three babies, plus many parties and receptions.