Pressures from the Lepcha and Bhutia communities of Sikkim have prompted the government of India to cancel a power dam proposed for one of their sacred rivers, a victory which should help them preserve their religious beliefs in the sanctity of nature. The news media in India in recent weeks have carried numerous stories about the controversy. 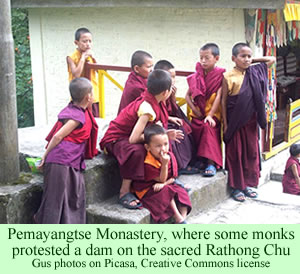 In late September, one of the major organizations fighting to preserve the sacred rivers and the mountainous region of the state, the Sikkim Bhutia Lepcha Apex Committee (SIBLAC), joined with a group of monks from the famous Pemayangtse Monastery in West Sikkim to petition the Sikkim state government. They asked Pawan Chamling, Chief Minister of the state, to cancel the so-called Lethang hydroelectric power dam project on the Rathong Chu, a river draining Mt. Kanchenjunga. The mountain, the third highest in the world, was the birthplace of the Lepcha people, they believe.

The petitioners argued that the Rathong Chu is the most sacred river in Sikkim, and the proposed 96 MW project violated their religious beliefs. An earlier power dam proposal for the same river had been cancelled by the state government in 1997 after the Lepchas and the Bhutias expressed their opposition.

Tseten Tashi Bhutia, convener of SIBLAC, argued that even the name “Lethang” was a misnomer, since power dams are normally named for the rivers they block, and this one was on the Rathong Chu. Few people were aware of which river was involved. He said that it was entitled to being considered sacred under the provisions of the Places of Worship Act. He said that since no money had yet been expended on the project, it would be easy to terminate.

On October 13th, the Standing Committee of the National Wildlife Board in New Delhi decided to reject 13 ill-advised projects in India that would have had an adverse impact on wildlife or protected areas. The Rathong Chu project was one of them. Prime Minister Manmohan Singh chairs the Board; the Union Environment and Forests Minister, Jairam Ramesh, chairs the Standing Committee. India’s Wildlife Protection Act requires the board to approve all projects that involve lands in or around national parks.

Mr. Bhutia quickly wrote to Mr. Ramesh to express the appreciation of his group for the cancellation. He did not miss an opportunity to urge that two other proposed dams on the same river should also be cancelled—the 97 MW Tashiding and the 99 MW Ting Ting hydro power projects. He argued that his group is not opposed to other economic developments, but the dams threaten to destroy their ancient beliefs, their heritage, and the religious sanctity of their landscape.

He wrote to Mr. Ramesh again on October 21, expressing for the second time his group’s opposition to the two remaining dams. He reiterated the sacred character of the Rathong Chu, his major reason for opposing the projects, and he elaborated briefly on the ecological harm that they would do. The river valley is an important focus area for biodiversity in the state, a fact which various experts have testified to in the past.