About 130 years ago, Roman Catholic priests from Germany moved into southwestern Tanzania and started converting the Fipa to Christianity, a process that began to change their culture, though they still retained their peacefulness when Willis did his field work in the 1960s. When Smythe was doing her field work in Ufipa between 1994 and 1996, she observed how powerful the church had become a century after the missionaries had arrived: its obvious wealth, material possessions, buildings, machinery, and infrastructure.

Smythe remarked, in her 2006 book, that church officials in the area played an important role in the economic endeavors of the people and in local politics. The church has evidently continued to assert itself in the political scene in Sumbawanga, the major city in the traditional Fipa region of southwestern Tanzania. The church today strongly dislikes one of the politicians.

Tanzania held national elections for president and for members of the National Parliament on October 31st this year, with the dominant party, the CCM (Chama Cha Mapinduzi, the Party of the Revolution), winning overwhelmingly.

Of the 343 seats in parliament, the CCM party won 251. Jakaya Mrisho Kikwete, the CCM candidate for president, was reelected by 62 percent of the votes. There was a problem in Sumbawanga, however, which caught national news attention. The CCM candidate, Mr. Aeish Hilaly won, according to the results announced on November 2, but by a very slim majority of 17,328 over the 17,132 votes for Mr. Norber Yamsebo, the candidate for another party, Chadema.

In the Rukwa Region, where the traditional Fipa kingdoms were located, CCM mostly won landslide victories. The contest between Mr. Hilaly and Mr. Norber was notable not only because of its close results, but more significantly because Mr. Hilaly had been a former student of Mr. Yamsebo. The latter had been the headmaster of the school the winner had attended. Mr. Yamsebo indicated he would challenge the results in court.

A week after the election, it became clear what the trouble was. Yamsebo alleged that the voting had been rigged. He claimed that some of the ballot boxes were late in arriving at the site where election results are announced, and that there could have been some tampering with the votes in the interval while they were in transit. 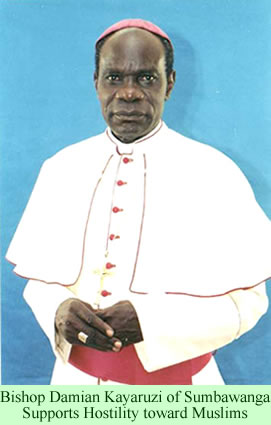 All of this may sound remarkably familiar, but the story became more interesting last week when the Catholic Church amplified its involvement in the election. Supporters of the CCM candidate, Mr. Hilaly, have been barred from taking part in prayers and other religious services in the catholic churches because of their political affiliation. Mr. Hilaly is a Muslim.

The attitude of the church evidently developed before the election. Around 400 Roman Catholics in Sumbawanga were barred from their churches during the campaign because of their open support for the Muslim candidate, and the diocese just announced that around 20 more members will be excommunicated for the same reason. Their names were to have been announced on Sunday. Some of them had already stated publicly that they did not intend to bend to the whims of the church leadership, and they indicated they would quit.

One of the defiant church members commented to the press, “we have been advised by some of our spiritual leaders to confess in the church during Mass but some of us have rejected the advice. We are now keen to join other religious sects.”

The Sumbawanga Diocese accused Hilaly, who has now been sworn in as a member of parliament, of making blasphemous remarks, though it is not clear from the press account last week exactly what he may have said that offended. Father Damian Kyaruzi, the Bishop of the Sumbawanga Diocese, had given his blessings to the persecution of wayward members of his flock who had the temerity to support the Muslim man. Recently, however, the bishop has not commented further about the controversy.

In addition, the church has excommunicated top members of the CCM party in the region who have supported the winner in the election, and it has punished priests who have not obeyed orders about the matter. The priests are being reprimanded, or locked out of their churches, until they repent. Interestingly, President Kikweti is also a Muslim, but he’s from eastern Tanzania, not Sumbawanga.