The cultural beliefs of some societies, such as the Ju/’hoansi, prompt people to share generously, to forgive failures, and to act altruistically. But there’s a catch. The actors and their actions must be known publicly. When people can act anonymously, their behavior may become more self-focused. 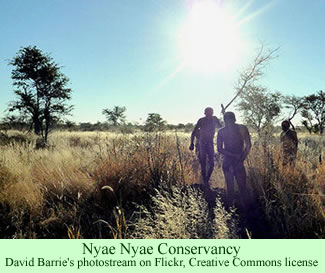 Polly Wiessner, an anthropologist who has studied the Ju/’hoansi extensively, tested some general theories about reciprocal behavior and cooperation while she was staying at the Nyae Nyae Conservancy in Namibia and engaged in a larger research project. She introduced some games in three different villages in 2004, analyzed the results, and published the results recently in an interesting journal article.

Sharing and formalized giving in traditional Ju/’hoan society were governed by socially-constructed rules that everyone monitored. A person who killed an antelope would share the meat with others, who would then give away some of their portions in waves of further sharing that would follow rules accepted for generations. Despite the changes in their society in recent decades, the author writes that some traditional social practices, such as sharing, persist, though they have weakened from 50 years ago.

She decided to analyze the contemporary sharing spirit of the Ju/’hoansi with some experiments. She invited the residents of three different villages to play what she calls the dictator game and the ultimatum game. In both games, the participants were paired with others in the village, but the paired individuals did not know who they were playing with. Wiessner assured the players that only she would know who their partners were. No one else would find out.

The Ju/’hoansi have had so much experience with the whims of outside investigators that they were not at all concerned by the terms of the game. They were pleased that the author said she would give very real money to each participant for the purposes of the game—money they desperately needed since their welfare checks had not come and they were hungry. Wiessner explained that she herself did not care how they played the game, nor would she worry about the results. The participants should act as they wished.

In the dictator game, a mediator gave $10 of Wiessner’s funds to each participant, who was told that he or she might divide the money with an unknown person in the community. The Ju/’hoansi themselves modified the rules by insisting that a minimum of $1.00 had to be offered, or it couldn’t really be a game of giving. Wiessner accepted the modification. The point was to measure the spirit of giving in a situation of complete anonymity.

The ultimatum game differed a bit. Again, each participant was given $10 and asked if he or she wanted to give some of it to an anonymous partner. If that other person, informed of the amount of the division, accepted the recipient’s decision, they both got their amounts. However, if the unknown other refused the amount, because it had been too stingy, neither participant would get anything. Nobody except the author would know what had been offered, accepted, or refused—or who the participants had been paired with. The people in the villages were most enthusiastic to play, and they were asked to not discuss the results with others for a few days until Wiessner could play the same game in each of her three study villages.

The results were perhaps predictable. The people responded selfishly to the dictator game, and even more selfishly to the ultimatum game that followed immediately afterwards. Wiessner speculates that the people gave even less to others once they were really convinced that they could be as selfish as they wished and there would be no consequences. No one would know.

Some participants gave generously, $4 or $5, in the first round, but when they realized that no one would know the difference, they acted more selfishly in the follow-up. Wiessner wondered if anyone would offer more than $5, in order to act as a big shot, but no one did.

In one of the villages, Wiessner sat around and discussed the results of the games with the participants immediately after they had finished playing. People said that since no one knew what others were giving, everyone should be happy with only one or two dollars. One person suggested that no one should give much because it might go to someone who had been stingy.

The author observed the results of her experiment during the days that followed, though she was discrete in order to not influence the actual course of events. Some of the participants took their own money, and the funds of others, to Tsumkwe or Gam, nearby towns, in order to shop for desperately needed supplies. The shoppers who went to Gam were lucky in securing transportation. They got into the town fairly quickly and were able to return the same day.

The shoppers gave specifically-requested items to some people, pooled the food they had bought, and shared the cooked meals in equal portions, even though the money used for the purchases had not been contributed equally. Their actions followed traditional patterns.

However, a group of people in the village were excluded. The ostracized faction had not properly shared the meat from a goat they had butchered not long before, and tensions were high about the matter. While the feasting people ate, they loudly criticized the excluded group so all could hear. Unfortunately, the two factions got into a brawl the next day, and the excluded group left the village to settle elsewhere. Weisser argues that the loud criticism during the feast had followed traditional patterns of handling inappropriate behavior.

She concludes that the Ju/’hoansi still play the games of life—sharing and reciprocity—according to long-established social rules. They know how meat from a goat should be properly distributed. As long as they live in a face to face village environment and can all monitor one another, they follow their traditional practices. However, when complete anonymity prevails, they can act as people do in many faceless, anonymous societies—as selfishly as seems appropriate for the circumstances.