Shipshewana, a small town just south of Interstate 80 in Northern Indiana, has become identified as a tourist Mecca with a special focus on the local, peaceful Amish. The broad highways leading into the bucolic community have wide lanes on either side so the Amish can safely drive their buggies into town. 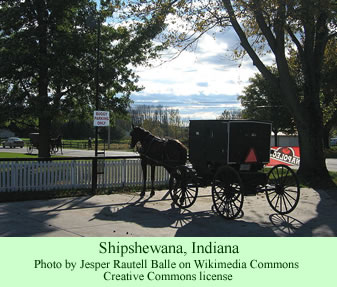 But a battle is forming in Shipshewana over the issue of alcohol. A convenience store, Gas America, has applied to the LaGrange County Alcoholic Beverage Board for a permit to sell warm beer and wine in town. Much of the community does not like the idea.

Kevin Lambright of Shipshewana Auction, just south of the center of town, expressed his opposition. “This is something we don’t need or desire in our community,” he said. Mr. Lambright has collected 180 signatures—out of the 500 residents in the town—on a petition which opposes the proposal. “It’s a good test, a good opportunity, a good challenge for us as a community to come together and say this is still an important factor,” he said, referring to the prohibition.

Linda Zehr, from the business Simple Sounds, one of many merchants involved in the protest, also expressed her opposition. She explained that the gas station had attempted to obtain a similar license once before, but then they had simply withdrawn their permit application. “We’ve always been a quiet dry town,” Zehr said.

Lambright was arranging van or bus transportation so the local Amish could attend the meeting of the county Alcoholic Beverage Board this week, where the permit application will be discussed and perhaps voted upon. The Shipshewana Town Board has already voted its opposition to the measure.

Some residents expressed their support for the proposal, since Shipshewana is a major tourist town, and tourists like to drink. But others believe that the dry nature of the community attracts tourists. There is one facility in town where, if people rent a room for a party, they can have someone else provide liquor for an event. But there is no place to walk in off the street and purchase alcoholic beverages.

It is not yet clear from the numerous media reports how the Amish of LaGrange County actually view the proposal, but typically their elders would oppose it. Drinking, especially by young people, is an issue that Amish churches sometimes have to deal with. Teenagers raised in Amish families are not yet church members, so adults have to react carefully to avoid alienating the next generation.

Of course the media like to portray the rumspringa, the running around period by Amish young people, as a time for partying, excessive alcohol, drugs, and sex. Television series, print literature, and movies have been devoted to the phenomenon. British director Lucy Walker made a film called “Devil’s Playground,” released in 2003, which explored the rowdy lives of a few LaGrange County Amish youths. She used over three hundred hours of footage to put together her 77 minute documentary, which showed people smoking, using illegal drugs, drinking, partying, and having pre-marital sexual encounters. One young man featured in the film took up drug dealing to support his expensive addiction.

A scholarly analysis by Stevick (2007) of the growing up period among the Amish points out that the wildness of the rumspringa period is overblown by the media. “Devil’s Playground” may have been a carefully created documentary, but it only portrays a small fringe of the Amish in LaGrange County.

Stevick indicates that the vast majority of young Amish would not permit a visiting filmmaker to photograph them doing anything, and the experiences of the drug user captured by Walker are hardly the norm. He argues that the daily activities of the vast majority of Amish young folks—weekly singing, hanging out with friends—would make for a very dull film.

The author adds that some drinking does occur among young, un-baptized Amish people in many smaller settlements, but drug use is rare.