The G/wi and the other San peoples of Botswana were back in court last week, pleading again for the right to reopen a borehole for water to serve their homes in the Central Kalahari Game Reserve. The five judges of the Botswana Court of Appeals took most of the day to hear their lawyer, and the lawyer for the government, argue the case.

The San peoples, or “Bushmen,” or “Basarwa,” as they are often called in the press, won the right to live in their traditional territory, the CKGR, in a High Court ruling in 2006. The government has tried to prevent them from returning to their homes ever since. One strategy it has used has been to deny them the right to reopen a borehole that they had relied on for decades, or to drill a new one.

The San took that issue to the nation’s High Court last July, where only one justice heard the case and ruled against them. They appealed last week in the Court of Appeals in an effort to overturn that ruling. The court is expected to return a verdict either today, the 27th, or next Monday, the 31st.

The attorney for the San, Gordon Bennett, told the court that his clients are not asking the government to do anything for them. “They have asked only that they be allowed to make their own arrangements to restore the borehole in order that they and their families can enjoy access to water that is of no use to anyone else but is of vital importance to them,” he said.

Bennett went on to argue that anyone who lives in the CKGR needs reliable water. The physical and mental health of the residents, particularly the elderly and the young people, can suffer without it. They do not have enough water to maintain cleanliness, mothers are unable to generate enough milk for their babies, people lack energy, and everyone is prone to sickness from the conditions. The people have to search for roots to extract a few drops of moisture, which is inadequate.

The attorney for the government argued that the G/wi and the other San people could simply move back to the resettlement camps, where the government provides water. He said that the government accepts the 2006 court judgment that the San must be allowed to live, if they want to, in their traditional homes in the CKGR, but that court decision did not obligate it to provide services.

It is not clear from the news reports if either side mentioned the underlying issue in the CKGR—the primary reason the government wants to keep the indigenous people out. Diamonds. Coincidentally—or perhaps not so much a coincidence—diamonds were also in the Botswana news last week. At the same time that it was arguing in court about preventing the San from having water near their homes in the CKGR, the government was granting a license to Gem Diamonds to begin mining operations there—which, of course, will require plenty of water. 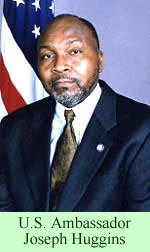 A third news story last week related to the situation. On Thursday, WikiLeaks, via The Guardian newspaper website, released a communication from March 18, 2005, by the then U.S. ambassador to Botswana, Joseph Huggins, concerning his reactions to a visit to Western Botswana and a San resettlement camp called New Xade. Numerous news sources issued stories about the ambassador’s reactions nearly six years ago to the conditions he saw.

According to the released document, the ambassador spoke on March 10, 2005, with officials of an unnamed NGO that operates a training site near Ghanzi, a major town in western Botswana which Mr. Huggins visited. It is useful to quote the ambassador directly. The published WikiLeaks report blanks out identifying information.

“XXXXXXXXXXXX was highly critical of the GOB [government of Botswana] resettlement policy, noting that people had been dumped in villages like New Xade, without being provided with sufficient shelter, support, or even food, and decried the idea as ludicrous that the people could transform themselves into industrious villagers, craft-sellers, while seventy miles away from a main road. They emphasized the arbitrariness, the lack of consultation, and the lack of transparency in GOB decision-making when it came to the treatment of the San/Basarwa peoples in the district.”

A few paragraphs later, Ambassador Huggins “asked how many persons had been removed from the CKGR, and how many had returned. In all XXXXXXXXXXXX [another informant] estimated some 2,500 had been evicted; some 250 persons, mostly older San/Basarwa, were still in the CKGR, and perhaps another 250 had returned over the past two years from the relocation villages. XXXXXXXXXXXX stated that San/Basarwa are systematically being discriminated against by the GOB, which moves them away from wherever there might be an income-generating opportunity.”

The next morning, March 11, the ambassador and his party traveled 70 miles along a sandy track to New Xade, the resettlement camp, accompanied by GOB officials. Perhaps because of the presence of the officials, the chief at the village, Kgosi Lobatse Beslag, greeted the party with words of praise for the conditions in the camp. People were much better off since they have moved, he said. When Mr. Huggins asked if people really wanted to be there, he was told they did. He asked how they made their living, and after some hedging, it became clear that everything depended on welfare payments from the government. The settlement was too far from the paved road to ever allow the sale of handicrafts to tourists.

Near the end of the meeting, however, some people began to express contrary opinions. The report states, “while many people were resigned to the relocation by now, many also went back to the CKGR. People mourn for their way of life, and regret that their children are not with them, but at school. Another grievance was that the Game and Wildlife Department prohibits New Xade residents who want to visit their relatives on the other side of the CKGR from traveling through the reserve; they have to go around.”

Ambassador Huggins concluded that “people have been dumped in economically absolutely unviable situations without forethought, and without follow-up support. The lack of imagination displayed on the part of the GOB is breathtaking.”