Amish people from Indiana attended a conference in Utah on Friday with fundamentalist Mormons, some of whom are active polygamists, so members of both patriarchal societies could share their perceptions about abuse.

The third annual Safety Net Clinical Conference, which had the title “Creating Safety to Access Service: Building Bridges with Plural Communities,” was held on March 11th at the Washington County School District Offices in St. George, Utah. Social workers, government officials, and Mormon fundamentalists included the Indiana Amish in order to compare ways of building bridges to the outside world. 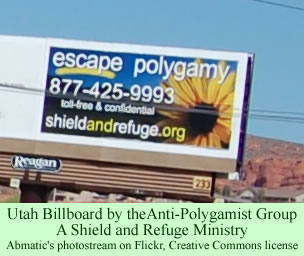 The focus of the proceedings, of course, was on the fundamentalist Mormons, estimated to number 38,000 people in Utah and surrounding states who are not members of the mainstream Church of Jesus Christ of Latter-day Saints.

Dr. Tom Metcalf, a pediatrician who gave the keynote speech at the conference, told the audience, “as the trust builds between the outside world and the inside, then the services which are needed can be provided.” It’s not clear from the news report if he was speaking of both groups in attendance or just about the fundamentalist Mormons, the subject of the conference.

Linda Kelsch, a fundamentalist Mormon and co-founder of the polygamy support group Principle Voices, spoke about the outreach and connections that the conference explored. “Seeing a face on a human being, and noticing that ‘You look like me!’ I think that’s been powerful.”

The Amish who traveled from Indiana to attend the conference did not want their identities revealed. They toured several polygamist communities— Hildale, Colorado City, and Centennial Park, Arizona. They noted that both the Amish and the fundamentalist Mormons have been isolated from the majority populations, and that both practice a conservative theology.

The Amish spoke about the similarities their society shares with the fundamentalist Mormons. They said that both communities have to cope with allegations of child abuse and domestic violence. Members of both communities often do not desire outside help with those kinds of problems.

An Amish woman told the conference how, one day, when her husband had severely beaten her son, she finally called the local child protective services in Indiana. Her act was difficult for her to do since the Amish, like the fundamentalist Mormons, hesitate to become involved with the mainstream society. Her effort was wasted, she said. The social worker who came to investigate took some pictures, counseled the husband to take anger management classes, and left.

Another time she called the police, who came and took her husband to jail—for 13 hours. He returned home and made her life “a living hell.”

She told the 100 participants at the conference, “I finally decided it was because we were Amish and it was unusual we would ask the law to come in to help us.” After 21 years of abuse, a friend finally helped her leave her husband and get her into a women’s shelter. But she made it clear that it was essential to remain a part of her culture—because the larger world looked impossibly huge to her.

Some of the polygamist participants at the conference said that if Utah and surrounding states wanted to empower people to reach out for help when situations of abuse occur, then they should decriminalize polygamy. Ms. Kelsch, the polygamy supporter, said that building trust only goes so far before decriminalization is imperative. That would effectively open up the trust within the polygamist communities so people could feel comfortable in seeking outside assistance whenever necessary.

Some of the polygamist communities are opening up, a bit, to outside visitors. Centennial Park, in Arizona just south of the Utah border, hosted a Meet and Greet event at their community center the evening before the conference. Susie Timpson, chair of the Centennial Park Action Committee, said that they feel they have the right to live their lives, as long as they live decently.

But Susan Hammon, formerly a member of the Fundamentalist LDS Church, explained how she went to a friend for help when she was being abused. The friend referred her to a group called Safety Net, which organizes communications between polygamist communities and nonprofit or government services. Her friend, she said, “created a bridge for me to deal with the abuse going on in our family in the way that I trusted.”

Her story was similar to that of the Amish woman. Abuse exists in many societies, even some of the peaceful ones. The difficulty is finding ways, particularly in patriarchal societies like the Amish and the polygamist Mormons, for women to connect with help when they really need it.